Promoters Frank Warren and Eddie Hearn are finally on speaking terms a full ten years after the latter entered the boxing fray.

Hearn, a wet behind the ears father’s son with a silver spoon still stuck in his mouth embarked on the challenge of taking over from Barry in 2010.

He almost blew it with the Audley Harrison debacle but has gone from strength-to-strength with a section of the British fans.

For years, Eddie didn’t see the point – and nor did Frank for that matter – of engaging in any dialogue. This resulted in a decade of snipes between the pair.

Whether it’s the craziness of the coronavirus or not, Eddie Hearn has answered an S.O.S from Frank Warren.

The Hall of Famer offered to stage dual Pay-Per-Views on BT Sport and Sky Sport with the blessing of his TV company.

As soon as the word ‘PPV’ was pushed in Hearn’s direction, he was certainly on board.

Sending an open letter Matchroom on Tuesday, Warren said in part: “The prospect of the best of British getting it on would reinvigorate the sport.

“It would increase the subplots. Really get people talking about the game again.

“Forget about promoter pride and egos, it is not about us. This is the time to turbo-charge boxing right back into the mainstream. To capture the imagination of the watching public.

“People talk about various industries resetting following the traumas this year has inflicted on the world. 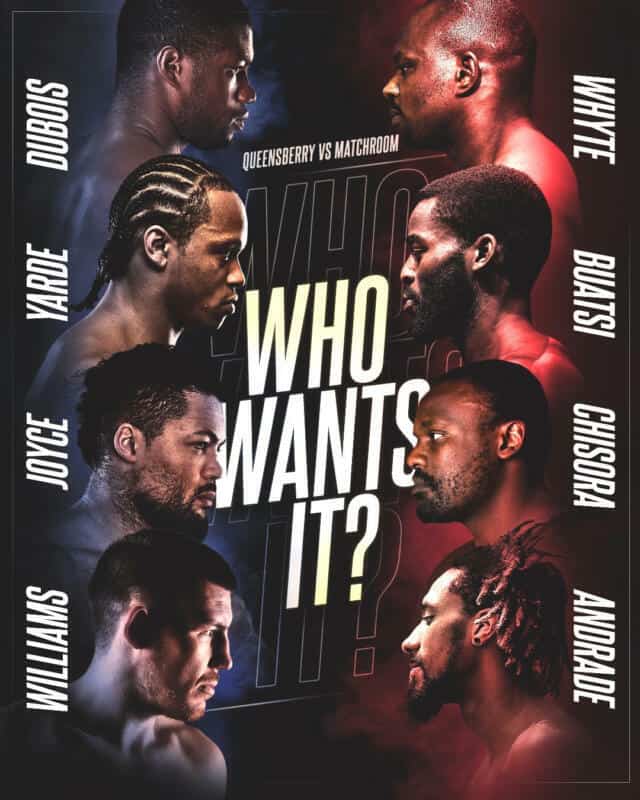 “I know there will be more than a few skeptics who will doubt the plausibility of such ambitious matchmaking due to the complex nature of the promotional terrain.

“I say we should smash down the barriers for the benefit of the sport. Most importantly, the people who support it.

“From our side, our broadcast partner BT Sport fully buys into the concept. They are ready and willing to help make it happen.

“If Sky Sports are of the same mindset, so much the better, and an equitable distribution of the fights can be worked out. No problem.

“There really isn’t any reason to put up any roadblocks to having the boxing pot overflowing with meaningful matches that would get the attention they deserve.

“Our door is wide open to begin negotiations for one-off spectacles, a sequence of events, a Test series of top ‘us versus them’ humdingers. The possibilities are endless and everything is on the table.

“Forget the past. Don’t focus on the difficulties. Let’s get on. Make the fights people want to see.

“When it comes time to make Fury v AJ, everyone involved will have to cooperate anyway so I see no reason why we can’t make these fights now.”

Hearn opened his arms to the idea of Joshua Buatsi vs Anthony Yarde, initially. It seems things could now go further than that.

We all know Hearn and Warren have to be on the same page in order to get Tyson Fury vs Anthony Joshua over the line.

Any dry runs before then will be much welcomed. Stay tuned!