Tyson Fury and Anthony Joshua have begun the PPV groundwork in a similar fashion to Floyd Mayweather and Manny Pacquiao.

Fury and his nemesis AJ, are set to battle it out for all the heavyweight marbles in 2021 as the United Kingdom prepares for the biggest fight in recent memory.

The two world champions, who hold all the major straps between them, had a ‘chance meeting’ in Marbella this week which looked more than a little staged – it must be said.

Much like when Floyd Mayweather and Manny Pacquiao ‘met at a basketball game’ for a photo-op, Fury and Joshua were pictured staring each other down abroad.

Mayweather and Pacquiao ‘bumped into each other’ despite Floyd later admitting they spoke regularly on the phone. Fury and AJ also speak to each other regularly.

But none-the-less, the pair have begun plugging the fight in anticipation of Fury vs Joshua going down next year.

Which one is the Floyd Mayweather (holding all the aces) and which one is Manny Pacquiao – you’ll have to decide for yourself.

It will all add into the PPV pot when the dust settles.

Now, all they have to do is come through two stipulated opponents each in the interim to make the UK blockbuster a reality.

Fury has to face Deontay Wilder for the third time before a WBC mandatory with Dillian Whyte. The World Boxing Council has reiterated that Whyte has to be next after Wilder.

They told World Boxing News through President Mauricio Sulaiman: “The WBC has consistently confirmed that a mandatory bout between the WBC world heavyweight champion must take place with the mandatory challenger and Interim champion Dillian Whyte. This must take place after Fury vs Wilder III.

“Under those circumstances, and with an order in place, the WBC would not consider a request to elevate anyone in the heavyweight division to Franchise Champion. That’s before that division’s mandatory obligations are fulfilled.”

As for Joshua, he has to beat Kubrat Pulev, an IBF ordered encounter before Oleksandr Usyk – the WBO number one.

Once those four contests are out of the way, hopefully by the summer of 2021, Fury and Joshua can put all the pieces into place.

It will likely be a November or December Pay-Per-View event next year. 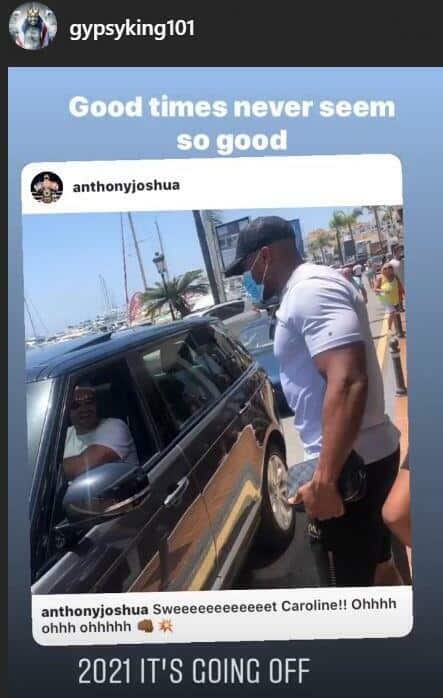 It’s rumored the first battle will happen in the United States, probably in Las Vegas. Then a homecoming rematch in the summer of 2022.

The UK leg would almost certainly take place at Wembley. But there’s much to arrange and several other site offers to contemplate before then.

This latest publicity stunt is more than welcome, though. It gives UK fans further hope that both are deadly serious about getting the British super-fight signed.