British heavyweight Dave Allen found himself trending on Twitter after stating he’d beat up the great Mike Tyson in what has become a big UK talking point.

Allen was discussing Tyson’s comeback at 53 years old. The Doncaster man put his foot in it when stating ‘The Baddest Man on the Planet’ should never fight again.

What ‘The White Rhino’ failed to realize is that fans are actually keen to see ‘Iron’ Mike don the gloves again. They know it’s only in an exhibition capacity.

The comments made by Allen went viral before the inevitable abuse followed. Allen shared some of this on his social media.

“When I woke up accidentally in time for an interview I totally forgot about this morning, I didn’t think I’d be trending on Twitter. (Also) having grown men crying that I said I would beat Mike Tyson this afternoon,” stated Allen.

Obviously a throw-away comment, Allen was subsequently trolled by some but mistaken for a 1970s US TV presenter by the majority of US fans.

They expected some sort of news on the Irish comedian. who died in 2005 at the age of 68.

Twitter does from time to time throw up those generational differences when you see Dave Allen trending only to find out its about boxing. But for the record there's only one Dave Allen. pic.twitter.com/jOHlHJYV3Z

One Tyson supporter decided to take things further and gave his opinion directly to the ‘Doncaster De La Hoya’.

In response, Allen shared what had been said. It went from anger to a compliment in moments. 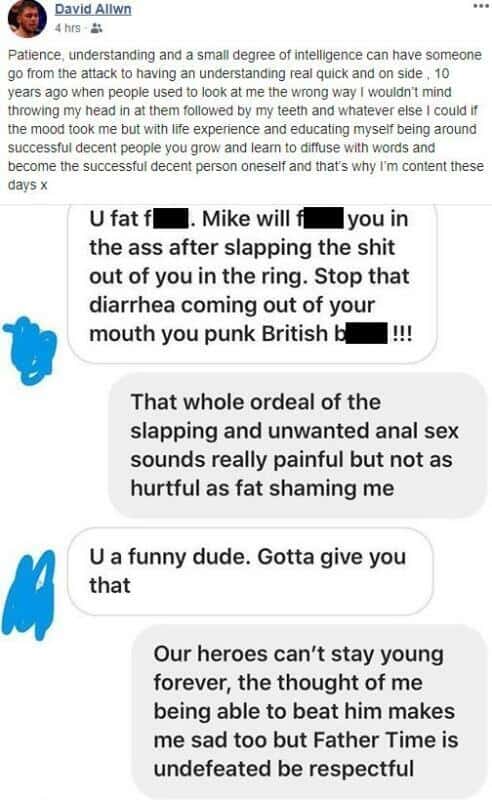 “Patience, understanding, and a small degree of intelligence can have someone go from the attack to having an understanding real quick. And onside,” said Allen.

“Ten years ago when people used to look at me the wrong way I wouldn’t mind throwing my head in at them followed by my teeth and whatever else I could if the mood took me.

There’s no doubting Allen would certainly be too much for an aged Tyson. That’s if he was in the correct shape himself. Although the context does seem a little opportunist on his part.

Allen has kept a low profile since being dominated by David Price. Subsequently contemplating retirement and suffering mental issues since then.

Hopefully, Allen will get the chance to shine again as the likable Yorkshireman still has much to offer the ranks in his home country.

Definitely not against Mike, though.