An ideal opponent has emerged to face former ‘Baddest Man on the Planet’ Mike Tyson in what would certainly get the juices flowing – revenge-wise.

Tyson is set to return to the ring for the first time in fifteen years in the near future after announcing his intentions in a recent episode of his successful podcast.

The former undisputed heavyweight is training to participate in a ‘three or four-round exhibition’. One man now stands out as the perfect foil for the New Yorker.

Back in 2004, and two years on from Lennox Lewis ending a long-running feud with an eighth-round stoppage in Memphis, Tyson headed to Louisville, Kentucky.

His opponent was a 31-year-old Brit with a 31-3 record named Danny Williams.

Nobody in the United States had really heard of the guy, although UK fans knew Danny as the man who fought and won with one arm in a British title fight four years earlier.

Dislocating his shoulder when fighting Mark Potter and unable to move his right arm at all, Williams knocked out his London rival at Wembley Conference Centre with a lefty swinger.

The feat instantly made Williams a cult hero on his home soil.

Despite the amazing win, ‘The Brixton Bomber’ had always blown hot and cold throughout his career.

When stepping up in class, Williams was inevitably always defeated. This time around, the odds were even more stacked against him.

Williams was a massive underdog. At the end of the day, Tyson was still Mike Tyson.

Everybody knew Mike was simply fighting for the money, but he was still expected to handle Williams with minimal bother.

What transpired was a fairytale for Williams. It closed the curtain firmly on a Hall of Fame career with an iconic image of Tyson slumped against the tops with a bloody face.

Earning a Las Vegas world title shot for his trouble, Williams had secured his own stateside boxing legacy as Tyson’s formidable aura faded away.

Losing to Vitali Klitschko at the Mandalay Bay five months later, Williams now had a money-earning name to keep him monetized for life.

As everybody knows, Tyson fought just once more eleven months on. He lost to another also-ran in Kevin McBride.

An amazing career was reduced to retirement due to embarrassment as cash sadly overtook pride.

That fateful night at the Freedom Hall State Fairground had the complete opposite effect on Williams and has kept him active ever since. 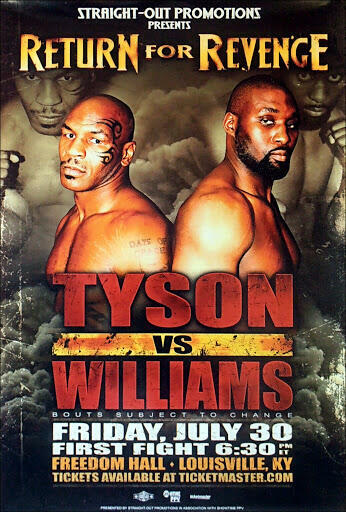 THE MAN WHO KO’D MIKE TYSON

The offers never stop coming for the ‘man who knocked out Mike Tyson’. At 46, Williams last fought in November, scoring the 54th triumph of his boxing tenure.

Since Tyson, Williams has had an astounding 47 contests. 25 of those bouts have ended badly as relentless promoters continue to book the veteran journeyman.

This is where Tyson’s recent comeback becomes intriguing. Danny is seemingly the ideal candidate to be in the opposite corner.

Interest would spike immediately. If only to see if a Tyson at 53 can avenge one of his five conquerors.

The other four are long out of the ring and have no means to return. They are Lennox Lewis, Evander Holyfield, James ‘Buster’ Douglas, and Kevin McBride, all now happily retired for years.

It’s possible one or two of those could be enticed for charity. Although Williams is ready now and would accept the fight in a heartbeat.

Tyson vs Williams II for charity? – You just never know in this sport we love.