Sky Sports, Hearn’s own TV company, chased up Fury’s promotional outfit at Top Rank to gauge whether the fight is possible.

WBN already knew it wasn’t and explained why HERE. That didn’t stop Matchroom boss Hearn continually spouting on the chances of Fury negating on a signed contract.

‘The Gypsy King’ has already put pen to paper on a trilogy with Deontay Wilder, which will happen next. Whilst Joshua has done similar with IBF mandatory Kubrat Pulev.

Hearn wants both to ditch those respective encounters and sign for a UK super-fight, a move which has been branded fake news in the pandemic climate.

What we already know to be the case has now been confirmed by Hearn’s own people.

“I have not personally had any conversations about that. It is not on my radar,” Top Rank second in command Todd DuBoef told Sky Sports on Fury vs Joshua.

“I am working with Wilder’s representatives on coming up with new potential dates in late-summer or early-fall for the Fury fight. We are speaking about potential venues too.

“That fight breaking up as a result of (Hearn’s talk of a Fury vs Joshua) fight? I have not been privy to any conversations about that.

“I have not heard that they are willing to step aside. Nobody has communicated that. We are contractually obligated to Wilder at this point. Pulev and Joshua are contracted. 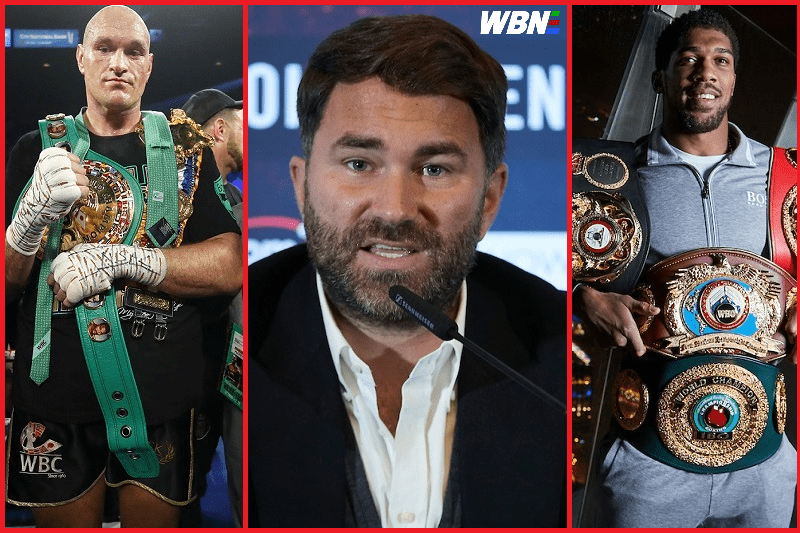 “There is too much uncertainty across the board, with everything, to speculate on (Fury vs Joshua) happening.

“In a perfect world without this virus then I could possibly see a path but right now I don’t see it.

That simple fact DuBoef stated that contracts are already in place inflicts further damage on what Hearn is attempting to do.

Two bouts have rock-solid agreements on the table, something Hearn has amazingly decided means absolutely nothing.

If boxers don’t have those signed agreements, the whole sport would lose any ounce of credibility. Surely Hearn wouldn’t like it if his contracts amounted to zero – in his world.

It’s a pure and certain fact that Fury vs Wilder III is on. Anyone who says anything else to the contrary is merely speculating themselves.

Therefore, if anything changes we will let you know immediately.