George Foreman took a ten-year sabbatical in 1977, never knowing whether he would one day step back into a boxing ring in anger.

A world-famous defeat to Muhammad Ali in Kinshasa had left George mentally vulnerable and questioning his ability.

Three years later, a shock points loss to Jimmy Young in San Juan sent him over the edge. Foreman reclused into a shell and wanted nothing more to do with the sport he loved.

An event of born-again-Christian proportions led Foreman to launch an astonishing comeback in 1987.

At the time, Foreman was laughed at by detractors and the man himself revealed how he felt in an interview with Jenna J of On The Ropes Radio.

“Because of my age (38 at that time), when I told everyone I was coming back into boxing at my weight, they laughed at me,” Foreman told OTR.

‘He’s too fat, he’s too old’. I’d hear those things, but every time I looked into the mirror I’d just say to myself, ‘Look, people are saying those things about you, but hey, it doesn’t matter if they’re true or not.

“You got to look out for your family. You got to support the youth center’. I traveled all over the country and I’d get into the ring and I was so big, so big, but I kept working out and I kept training.

“I listened to the jokes about me. As a matter of fact, I started to laugh with them. People didn’t notice that I wasn’t mad. I was laughing because I had ten years of telling people who lost loved ones, have faith.

“You can do anything. All things are possible. For the first time, I had really used the product that I had been selling ‘have faith’. I did. I had more than enough faith to do anything.” 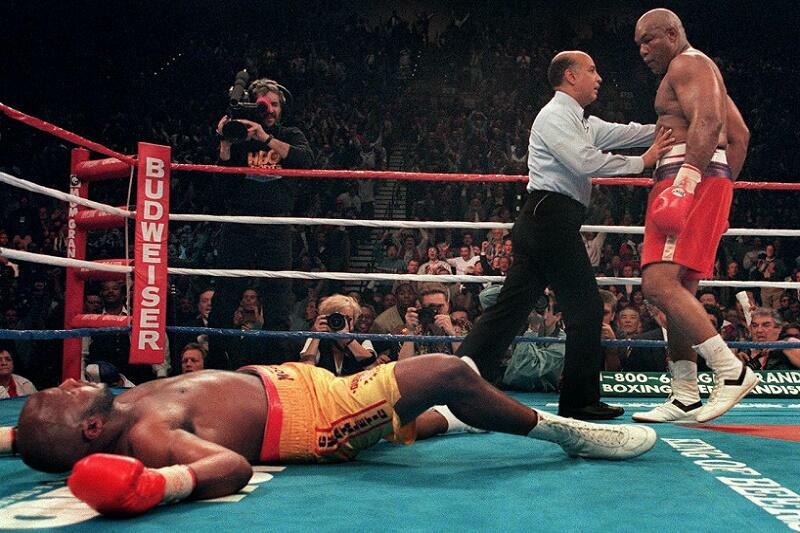 Eighteen straight knockouts later, and Foreman was back in the hunt for a world title shot. Eventually, the Olympic gold medalist would create history.

Asked by Jenna about the whole age thing and eventually becoming the oldest heavyweight champion of all time, Foreman said he felt justified.

“Yeah, you think about twenty years, a whole twenty-year time span passed. I told people that wasn’t the George Foreman in Africa (against Ali).

“I could have been champion of the world, I had all these excuses, and people laughed at me.

“Twenty years later I’m in the ring given a chance and there’s redemption, and from that point on, even for myself on a personal basis I could sit back with some kind of contentment to say, ‘I told you’.

“But it was back to preaching and being a father again. No big deal. You have one moment in life where you can say, ‘I did it, thank God for it’ and the next day is about getting to the church, and preaching, and doing your work.”