Canelo vs. Smith: Weigh-in and fight night to be streamed on DAZN

FIGHT TRAILER – “The Battle for Super Middleweight Supremacy -In his pursuit for greatness Canelo has always sought to conquer the very best, a crusade that has stretched across four divisions and left many great fighters in his wake.​ In Callum Smith, Canelo is once again going after the toughest opponent out there.​ Englishman Smith is the man to beat at 168 lbs. Unbeaten in 27 fights, this will be his third world title defense and the biggest fight of his life. You don’t get a shot at the king often and if he were to strike Canelo down, it would be sweet revenge for his brother Liam’s defeat to the Mexican in 2016.​ Expect fireworks from a brave challenger and a bloodthirsty king.​ 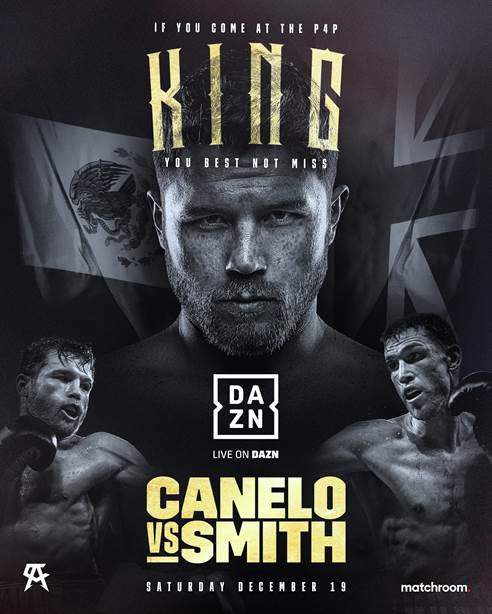 40 DAYS: CANELO VS. SMITH – Episode 1 & Episode 2: Executive Produced by Tottenham star Harry Kane, this latest edition of 40 DAYS – DAZN’s unfiltered, behind-the-scenes series on how world-class fighters prepare and train – explores what it truly takes to be recognized as number one in the world, taking a raw and authentic look at the two champions ahead of their December 19 clash. Also featured are their trainers Eddy Reynoso and Joe Gallagher and promoter Eddie Hearn.