Israil Madrimov forced the distance for the first time, Results from Tulsa

In the co-feature to Jessica McCaskill’s amazing triumph over Cecilia Braekhus, Uzbekistan’s Israil Madrimov (6-0, 5 KOs) went the distance for the first time in his professional career.

He earned a unanimous decision victory against a game Eric Walker (20-3, 8 KOs).

Madrimov landed nearly 40% of his punches and scored a stunning knockdown in the 9th round, which was ultimately ruled a slip by referee Gary Ritter.

His fellow countryman Shakhram Giyasov (10-0, 8 KOs) scored a rousing knockout over Wiston Campos (31-8-6,19 KOs) with a devastating left hand to the body at the end of the 3rd round.

On his performance: “The fight was tougher than I expected to be honest. I think that there was a knockout in the 9th round. I landed that punch clean but unfortunately it didn’t count. The fight was tough. I knew that he was a very experienced and tough opponent but we took this fight on too short notice. But that’s a learning experience. I needed this fight, it was my first time every going 12 rounds. I will be honest, I felt great at moments. If I would have boxed from earlier on instead of looking for the knockout, it would have been an easier fight.”

On his fatigue: “I will be honest, I was a little bit tired in the middle rounds but I felt I landed good shots on him and he was taking them. I decided to wait a little bit to get my strength back, I knew it would come back in a round. It was fatigue but it was also a plan. I felt that I needed to keep my stamina because it seemed like we were going the distance.”

On his performance: “He was definitely tough. The last time I was in the ring was like eight months ago so I had some rust. This Coronavirus and the training, I was actually 20 lbs. over three weeks ago so I had a quick training camp. But I give Jarvis a lot of credit, I was hitting him with some shots and he wasn’t falling. He’s a strong veteran.”

On his weight cut: “I went on a strict, strict diet. I never skipped sugar a day in my life but for this training camp, it’s been like three weeks! It was hell. I also went through a ton of other stuff besides the Coronavirus but there’s no excuses.”

On fighting at 154: “Of course. I am still growing. I feel like I don’t have my ‘man power’ yet. I feel like I get stronger every single week. But definitely, if it’s for a world title, I will be at 154.”

On the knockout: “I’ll be honest, I felt his liver by my knuckles and I didn’t expect him to get up. The expression on his face after landing clean, I didn’t think he would get up”

On his title aspirations: “It is really hard to be away from my family and friends but I know what I am doing. I have a dream, I have big goals. I want all the belts in the super lightweight division. Whoever has the belts, I am coming in your direction. I am always ready (for a title shot). I will talk to management and my promoter, and when they say it’s time to fight for a title, I will do it. I am like a soldier, give me an order and I will go for it.” 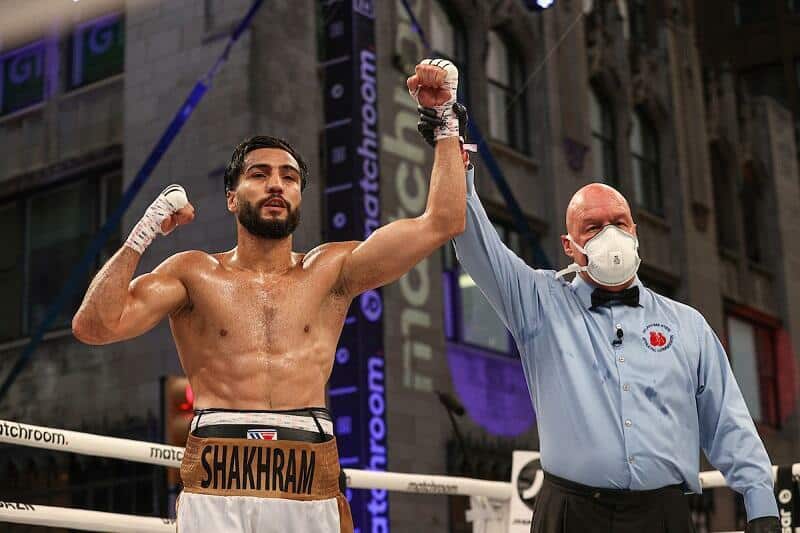 On getting the victory: “It feels good to be back again but it took me a while to warm up. It wasn’t my best performance. I know I can do way better. He was falling back trying to counter me so I had to be cautious. I had to be smart and not get hit with any clean, dumb shots.”

On his performance: “I rate my performance a B-. I know when I watch the fight, I will be pissed off at myself. This was about getting my feet wet though, it’s been eight months since I have been in the ring. I had to get used to being back in the ring again with 8 oz. gloves and no headgear. It was ring rust. As the fight went on, I started picking it up in the 6th round and started letting my hands go a little bit more. I did drop him with that one punch but I didn’t think he was hurt. I would have most definitely broke him if I had more rounds. He was breaking down. I touched him to the body a few times and he wasn’t punching back. I knew I was winning the fight though so I had to be smart.”

On learning from Canelo: “I love the way he places his punches and his shot selection. He knows how to throw every punch and sits down so well on his punches.”