Manny Pacquiao is entirely able to put his WBA welterweight title on the line in an exhibition against Ryan Garcia, but this may not be the case, WBN understands.

For some reason, Pacquiao vs. Garcia could take place as an exhibition, rather than a fully-fledged title fight at 147 pounds. Who knows why?

Pacquiao is the champion, and Garcia is an up and coming young star. Many see the fight in the same ballpark at Floyd Mayweather vs. Canelo Alvarez.

It’s a passing of the torch in some respects.

Despite this fact, strange reports are emerging from the Garcia camp that Ryan doesn’t want to risk his ‘0’ against the eight-weight boxing legend.

In what could become an alarming precedent, Garcia is considering facing Pacquiao in a ten-round exhibition.

WBN can see no other grounds for Garcia to go down this route beside the fact he wants to preserve his undefeated record. 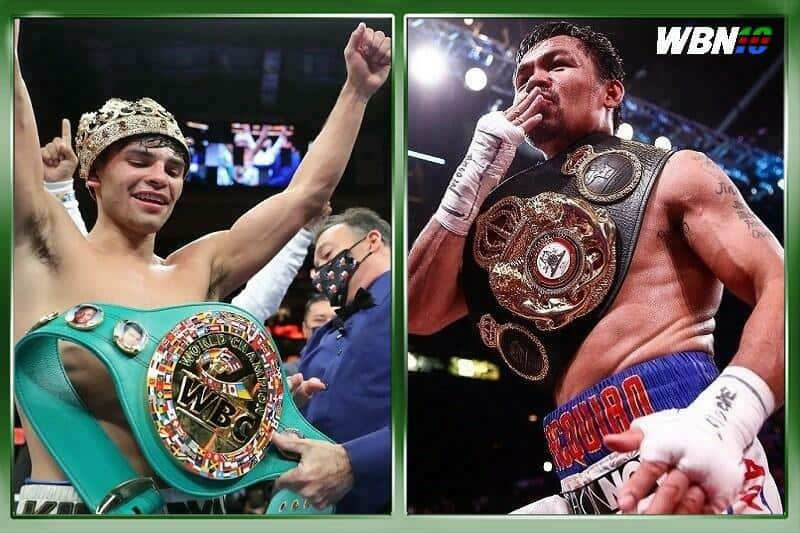 It’s all together on-trend with what’s happening in the sport right now. It’s an unfathomable turn of events for an up and coming contender.

Why would Garcia not want to go for glory in a catchweight battle with one of the best to do it? – If he does shy away, it could undoubtedly damage his reputation as a fighter.

‘King Ry’ is on the cusp of a shot at a lightweight belt already and called out Gervonta Davis for his opportunity very publicly before Pacquiao came along.

The fact he’s neither going to face Tank next, as promised, or put his perfect record on the line against the ‘Pacman’ speaks volumes. It’s not a road Garcia should tread.

Garica is a talented, skillful, and powerful boxer with a long career ahead of him. Why not show your cards early and take a risk.

Situations like this are becoming more apparent in the sport. The waters are getting muddied by a spate of exhibitions.

Garcia should lead by example.

Pacquiao vs. Garcia for the WBA welterweight title is what the fans deserve to see. Garcia needs to put his C.V. in the air alongside Pacquiao’s strap.

The fans shouldn’t settle for anything less.

Regarding the weight, a meeting between 140 and 142 seems ideal for both. The WBA would approve anything below the 147-pound limit anyway.

Whispers of something higher than that are another confusing factor. Pacquiao is a natural super lightweight and would certainly be open to compromise.

All we need now is for Manny Pacquiao to acknowledge his part in the event. Silence has so far been the response three days on from Garcia’s confirmation.