Boxing legend Floyd Mayweather is to become a first-ballot Hall of Famer next year on the back of his WBN Fighter of the Decade Award in 2020.

Mayweather, who took the WBN trophy ahead of Andre Ward and Canelo Alvarez, is inducted alongside one of his rivals for the ten-year accolade.

The International Boxing Hall of Fame and Museum announced the members of the Class of 2021 on Tuesday.

They include living inductees in former world champions Wladimir Klitschko, Floyd Mayweather, and Andre Ward in the men’s Modern-Day category.

Finally, Dr. Margaret Goodman is honored in the Non-Participant category. 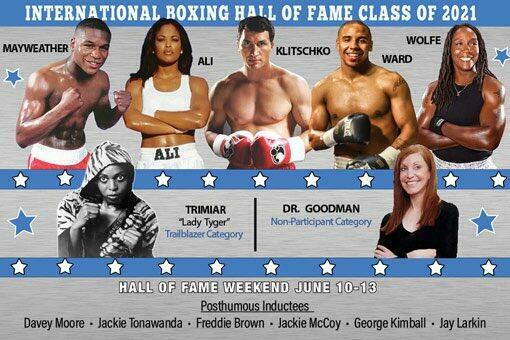 Inductees were voted in by members of the Boxing Writers Association and a panel of international boxing historians.

“We’re extremely excited about the Class of 2021 and are very much looking forward to honoring the newest class of inductees to earn boxing’s highest honor,” said Executive Director Edward Brophy.

Due to Covid-19 and the cancellation of the 2020 ceremony, the IBHOF gave the following confirmation:

As previously announced, the Class of 2020 are:

They will be honored with the Class of 2021 following the postponement of the 2020 Induction Weekend.

Many events in “Boxing’s Hometown” of Canastota throughout the four-day celebration, including a 5K Race / Fun Run, golf tournament, boxing autograph card show, VIP Cocktail Reception, Parade of Champions, and the Official Induction Ceremony on the Hall of Fame Museum Grounds, are scheduled.