Former two-weight world champion Timothy Bradley has come under fire in his job as an analyst on US TV network ESPN and ESPN+.

WBN had noticed on more than one occasion that Bradley was the subject of derogatory comments on social media.

This latest criticism comes almost a year on from the last time WBN flagged the American for an outburst. Back then, trainer Kevin Cunningham labeled Bradley ‘a lacky’ and Uncle Tom’ for his shock rant about Al Haymon’s Premier Boxing Champions.

At the time, Cunningham said: “PBC has the marquee names in the division. The last time that I checked, they were all fighting one another.

“So this makes them less than men, Timmy? TR did it for years, and Bradley participated (Pac/Mar 4x, Pac/Bradley 3x, Pac/Mor 3x, Pac/Barr 2x). I guess different rules for Bob.

“Tim Bradley disrespects the entire PBC roster because Top Rank doesn’t have marquee names for Crawford. Somebody tell Bradley buck dancing for Bob won’t get the fights done. It’s a shame Bud’s caught up in that nonsense!”

The original tweet featuring the insults to Bradley was deleted. 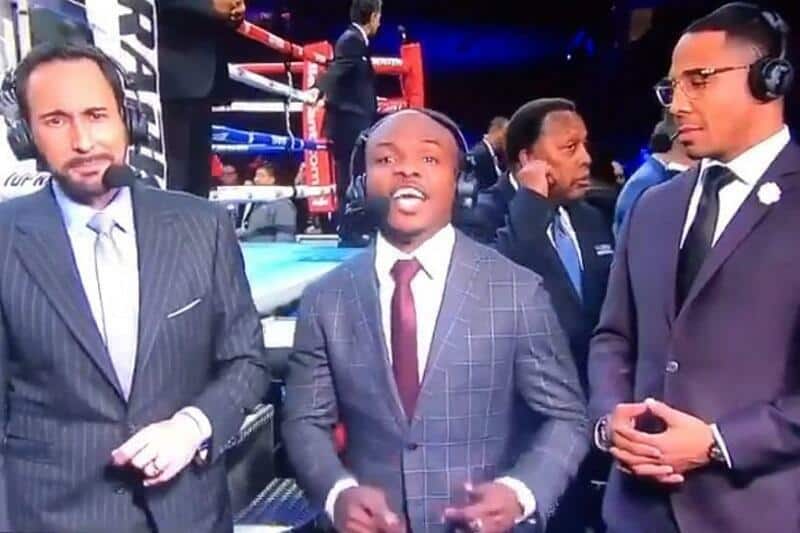 Former Bradley divisional rival Andre Berto even sent the commentator a warning himself. He said: “Tim Bradley and the rest of that ESPN crew over there better relax on PBC.

Last month, Bradley gave his opinion on Edgar Berlanga stripping down to make weight. It seems one fan took it personally.

“He made weight, just had to drop his draws! Talk about his discipline. This guy gets worse every week. It’s painful to hear his voice.”

The reply comments weren’t good either.

“Amen to that, please! He says things that make me go, HUH? What the hell is he watching or talking about?” – said one.

Another added: “Couldn’t agree more. He’s hard to listen to.”

On the flip side, some believe Bradley is doing a good job.

Comments included: “Tim Bradley gets WAY too much hate. He’s a great commentator.”

But the vast majority of those express dislike for Bradley, with one even claiming ‘Andre Ward hates working with Timothy Bradley’ due to his demeanor when they are together.

The overwhelming complaint against Bradley is talking too much, though. That seems to be the biggest irk of anyone who takes the time to slaughter Bradley.

It remains to be seen if that will change anytime soon.

Timothy Bradley signed a ‘multi-year’ extension to his deal, which began in 2017, back in June 2018.