Boxing legend Floyd Mayweather has named his top five fighters of all time in a controversial choice that has sparked a whole separate debate.

Despite the fact that many of those considered to be among the best ever not being selected, Mayweather proclaimed Holmes the number one. The former top division ruler came above Muhammad Ali, Joe Louis, and lots of others.

What makes the Holmes pick even more eye-watering is the fact that Anthony Joshua was chosen, predominantly by UK fans, to beat Holmes in a hotly-contested vote.

Back in April, UK broadcasters BT Sport asked the boxing community to poll the best heavyweight ever. Joshua beat Holmes in the Round of 16.

Who goes through to the quarter finals? 🤔

Gaining 52.8% of the vote, Joshua made it through to a quarter-final with George Foreman, eventually losing to the big-punching monster. Foreman claimed over 60% of that poll.

But considering Holmes is Mayweather’s best ever at 200 pounds plus, it makes Joshua’s victory all the more unfathomable to digest.

Promoter Lou DiBella was among many, many boxing personnel to previously comment on the outcome.

“Damn, this is comical. Larry would have played with him (Joshua),” said the Hall of Famer. “AJ is a very good heavyweight. Larry is a boxing all-time great. 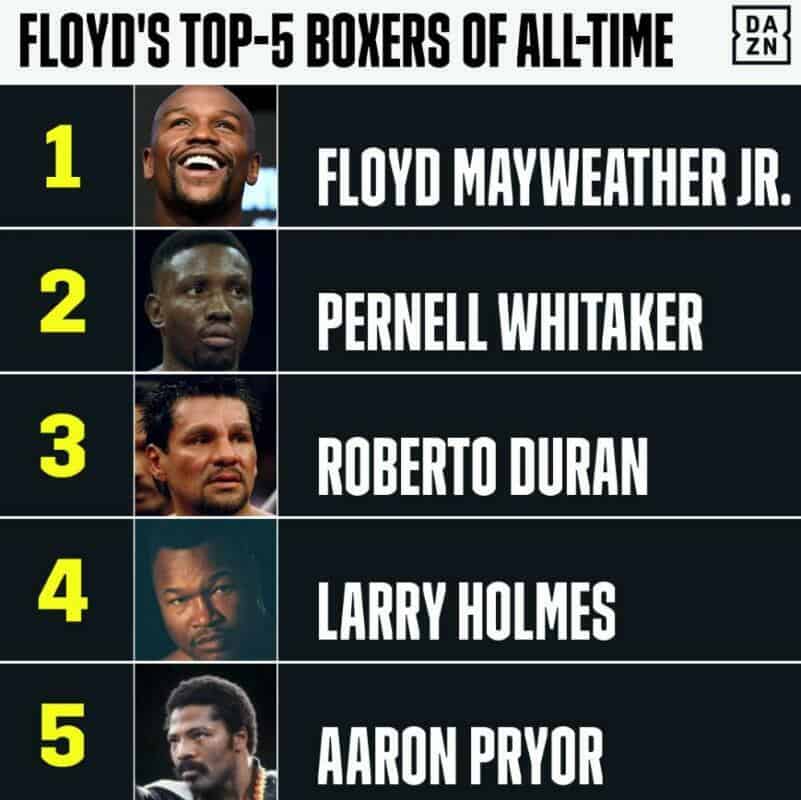 Holmes holds the number two spot in history when it comes to making heavyweight title defenses. The 70-year-old is revered and elevated by those in the know.

As for Mayweather’s choices, they are always designed to stir up controversy. Placing himself at the helm is evidence enough of that.

Mayweather is definitely in the shake-up but would have to share the spotlight with Sugar Ray Robinson, Ali, and a plethora of other contenders.

Sadly for Joshua, the 2012 Olympic gold medalist is from an era when there is simply a lack of depth sufficient enough to warrant a spot.

Beating a faded Wladimir Klitschko is as yet the top achievement of his career. AJ would have to defeat Tyson Fury and Deontay Wilder in this generation to even be in the conversation.

According to Boxrec, Joshua is a generous 23rd of all-time. Amazingly, Klitschko is third. This tells you all you need to know about that list.

The debate rumbles on.

Phil Jay is Editor of WBN. Auxiliary member of the Boxing Writers Association of America. Follow on Twitter @PhilDJay