Days after beating the heaviest deadlift record on earth, Hafþór Björnsson has signed on to face strongman rival Eddie Hall in a boxing match.

The two brutes, who have both won the title of ‘World’s Strongest Man’, will meet in an epic collision in Las Vegas next year.

Confirming the news, the pair revealed they have begun training for what’s being billed as ‘The Heaviest Boxing Match in History’

“It’s official. September 2021 in Las Vegas, Nevada, The Mountain vs The Beast. The next year and a half of my career will be solely dedicated towards this fight,” said Bjornsson.

“I can’t wait to have my family ringside as I throw down. I’m coming for you!”

Previously, Thor has outlined his regime had begun for the 2021 battle.

“Doing some light training today, working on technique and skills. Feeling fresh and ready to go! Heading out for my first track and field session now.” 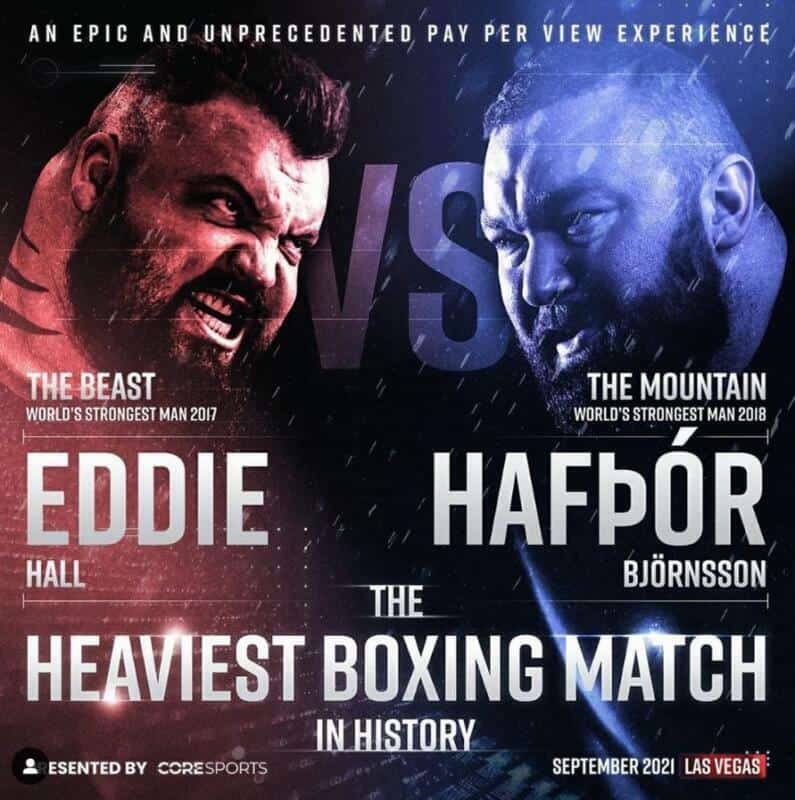 Hall, who retired from strongman competition after winning the crown following several failed attempts, also wants a deadlift head-to-head in the future.

Before Bjornsson broke his half-ton record by the smallest of margins, Hall said: “Good luck to @thorbjornsson for his 501kg deadlift today.

“Hope he smashes it and I look forward to him attempting it at a competition too when all this is over.”

On the bout, of which details are yet to be fully revealed, the Briton added: “IT’S ON‼️

“I’ve signed the papers and it’s “OFFICIALLY” on. Thanks to @coresportsworld for the opportunity! #BackUpYourBull Big Love. The Beast.”

EDDIE HALL vs THE MOUNTAIN

Bjornsson and Hall had previously gone at it on social media. Hall was unhappy at Thor’s attempts to beat his old record out of contest conditions.

“Absolutely no legitimate sport would acknowledge World Records broken out of competition and you are undermining the very sport you are claiming to champion.

“I genuinely look forward to having my record broken and seeing what is possible. I think you are probably the man to do it.

“There’s no denying that and I’ll still shake your hand afterward and say well done.

“If you do it under the appropriate conditions.”

“Eddie Hall has been running his mouth now for weeks and I know he got the same deal. So: Eddie, I just knocked out your record and now I’m ready to knock you out in the ring.”

The bout will be available on Pay-Per-View in September 2021.