A cheeky fan of Juan Manuel Marquez has mocked up a photo of the Mexican superstar’s most famous night against Manny Pacquiao.

‘JMM’ put Pacquiao’s lights out in the sixth round of a classic 2012 battle at the MGM Grand in Las Vegas. The victory was a career justification for Marquez, who believed he didn’t deserve to lose to Pacquiao twice before.

Their first battle also ended in a controversial draw, leaving Marquez wondering what he had to do to get a win against the ‘Pacman’.

Well, he certainly got his answer definitively in Nevada. A see-saw battle for five rounds was followed up by the ‘punch heard around the world’.

Pacquiao was completely out and face down on the canvas as Marquez celebrated his vindication and revenge.

Immediately, Pacquiao’s loss turned into a series of memes and GIFs, with the latest in a long line of social media laughs coming at the Filipino’s expense.

In the picture, Marquez is posing as a bed and mattress salesman. Pacquiao is adopting his famous canvas pose on one of the beds. 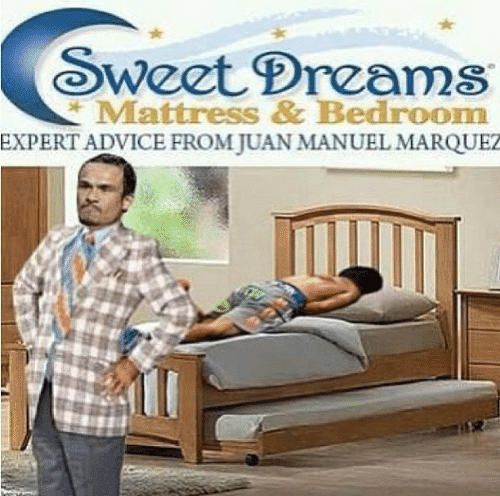 Under the banner ‘Sweet Dreams’, Marquez offers ‘Expert Advice’ on mattresses and bedrooms. It’s safe to say Pacquiao fans haven’t seen the funny side of it.

Years on from what has since been described as his best win despite a four-weight Hall of Famer career, ‘Dinamita’ resisted all offers for a fifth fight.

Pacquiao reportedly offered Marquez a nine-figure sum to meet him again on Pay-Per-View on more than one occasion since the bout IV.

“There was an offer for a fifth fight against Pacquiao in the Philippines for $100 million dollars. I refused in order to keep my honor. Keep the glory of the fourth fight from 2012,” Marquez told ESPN Deportes in 2016.

“It’s a lot of money. But honor, pride and what we did is more important than doing a fifth fight. Let’s pretend that the fifth fight would happen.

“How about if I get robbed in the fight? We do not know what can happen. He’s capable of hitting me with the right shot and hurting me badly.

“So I would place myself at risk. The glory and what we did in 2012 is worth more than that amount they were offering,” he added.

Therefore, Marquez well and truly put the Pacquiao rivalry to bed, which sits alongside the mock-up as a full-stop on the saga.