The man who shot dead Chris Van Heerden’s father Daniel last week has been named in court as he attempted to secure bail.

Sabelo Dlamini, a Red Ant Security Guard, plugged the 61 year-old in the back with a fatal bullet.

Daniel Van Heerden, in an incident caught on camera, was seen attempting to report Dlamini for unlawfully offloading meat.

As Daniel took Dlamini’s car key and threatened to have him ‘locked up’, the perpetrator fired a round which ultimately cost the dad of thirteen his life.

Former world champion Chris flew in from Los Angeles last weekend. The fighter and his older brother Danie, have campaigned for a lengthy prison sentence.

The fact Dlamini used no other means of defusing the tense situation with Daniel is damning in the video clip, which has now gone viral.

Jana Marx of Network 24 South Africa was in court when Dlamini faced the judge.

“Regional Court in Vereeniging: Sabelo Dlamini, the security guard accused of murdering Danie van Heerden from Meyerton is expected to apply for bail,” she wrote.

The public outcry against the murder has been immense. Many have signed a petition set-up by Danie online.

Almost 5,000 have done so despite an initial goal of 1,000. The Van Heerden’s are hopeful Dlamini will get the justice they seek. 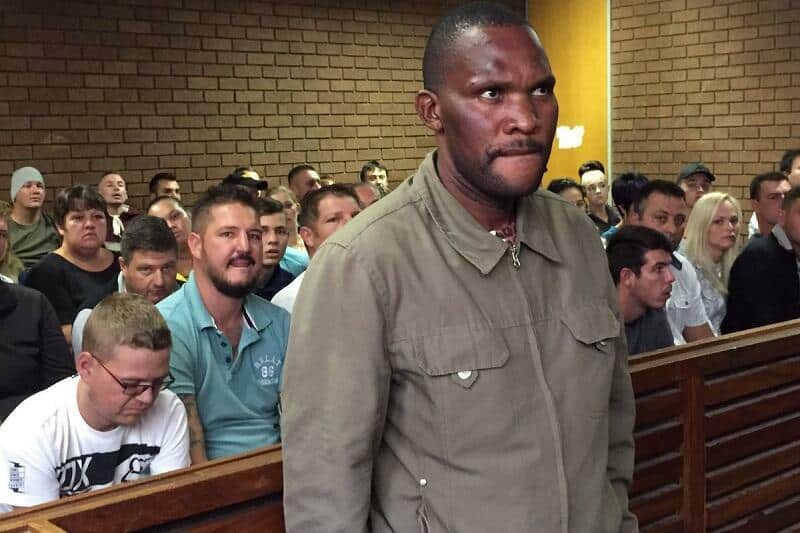 The murderer of Mr. Van Heerden’s bail application has been postponed until this Wednesday – 2nd January.

A large petition must be presented to the Vereeniging Magistrates Court on this date with as many signatures as possible.

In order to assist the Court in considering declining the bail application until the matter reaches trial.

Furthermore, encourage those in support to digitally sign this petition. And if possible be at the Vereeniging Magistrates Court in support of this great man.

Support the family in preventing bail whilst they come to terms with this loss and planning his memorial.