Hearn: Joshua’s next opponent is 80%

Eddie Hearn says a second fight between Anthony Joshua and Dillian Whyte is almost certain to be done for April 13.

Despite constant contact with Tyson Fury over encounters with Joshua or Whyte next year, Hearn is ready to admit defeat.

Talks had been ongoing with Deontay Wilder for a possible clash at Wembley with Joshua, although the American’s team is focused solely on a rematch with Fury.

Wilder v Fury was one of the greatest heavyweight bouts in recent memory. Both sides want to capitalize on the success in 2019.

“He (Tyson Fury) texted me a few times. We’ve spoken a few times,’ Heard said, according to metro.co.uk.

“Joshua wants to be undisputed. If he can’t get those, then he looks at Fury and Dillian. ‘He (Tyson) is calling me. Whyte is a great fight. We tried to make that fight before.

“Whyte-Fury is a massive fight. That’s a Wembley fight.” 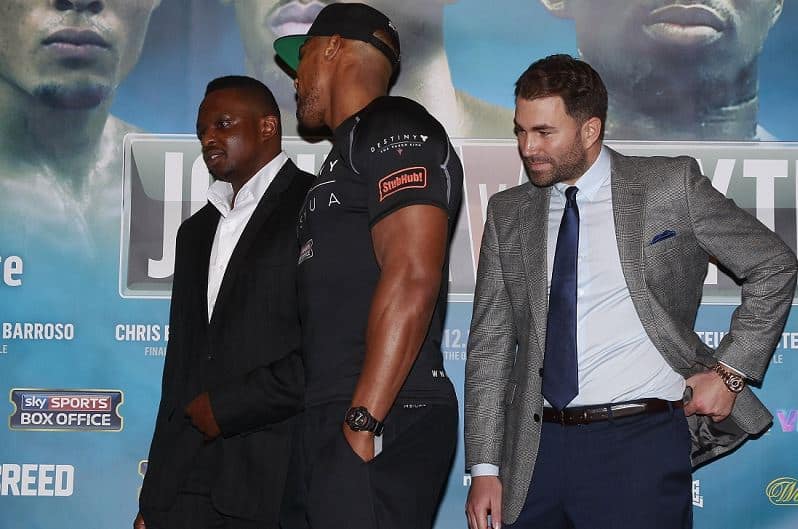 Hearn added what he believes will happen next: “I think he (Whyte) is about 80% likely to fight at Wembley on April 13. I think the priority (for Joshua) is Wilder. He wants to fight Wilder. But I don’t believe that will happen.

“If it’s an April 13 date at Wembley, you’d need it on sale end of January, something like that. (But) they’re (Wilder team are) not showing a lot of willingness,” stated the Matchroom boss.

Two of those victories came by way of spectacular knockout, and due to his apparent improvements, many see Whyte as far more of a threat than the first time the pair met on the domestic level in 2015.

Another vast crowd should be on hand for what would be the first all-British heavyweight battle since David Haye v Audley Harrison in 2010.