Thousands of Texas fans came out to Minute Maid Park, home of the Houston Astros, to see and cheer for their favorite Mexican fighters. With fan hysteria and swelling crowds, fire marshals shut down the fan entrance leaving hundreds still outside waiting to get in to catch a glimpse of Canelo and Chávez, Jr.

Below are what the fighters and their teams had to say at the press conference in Houston:

“Every time I come to Texas, you give me so much love and support. Thank you for welcoming me. I will train hard and prepare 100 percent. On May 6, T-Mobile Arena will be full and all of us together can claim the victory and proclaim together, ‘Viva Mexico’!”

“I’m proud to be in Texas again. I love boxing, and I love Texas. I’m undefeated here in Texas. I promise all the Mexican fans that on May 6 I will win this fight.” 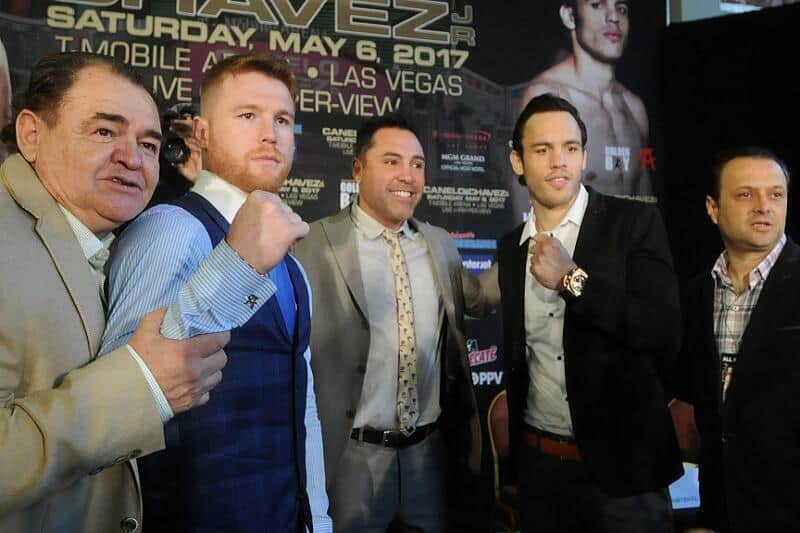 “To the fans–we always love coming to Houston and thank you for your tremendous support. There are thousands of you here today that are lined up, some as early as 5:00 a.m., to see your favorite fighters. Canelo and Chávez, Jr. do this for the fans. This fight is for the fans.

“Canelo vs. Chávez, Jr. is, by far and away, the biggest boxing event of 2017, and we are expecting a knockdown, drag-out brawl between two of the most skilled, aggressive fighters in the sport. Tickets went on sale Monday, and are going incredibly fast. I hear we are almost sold out. There are less than 1,000 tickets available for Canelo-Chávez, Jr.

“On May 6 we have two great Mexican warriors; people from all over the world will watch this guaranteed war.”

“To be here and see all this support from you in Houston is beautiful. On May 6, it’s going to be all about honor. Lets stop with all the back and forth and let’s make Mexico rise and together we will scream, ‘Viva Mexico!'”

“We are so happy to be here in the great state of Texas. This fight is about pride. This fight is abut legacy. And this fight most importantly is about the fans. These fighters wouldn’t be here if it wasn’t for you, the fans. This is a big fight between two Mexican warriors, but this is also a fight for the world. Everyone will be proud of boxing after this fight.

“Join us in Vegas or watch on Pay-Per-View. This will not be a fight with two guys walking around, trying to figure each other out. This is going to be a fight with non-stop action so don’t blink your eyes. For all you Canelo fans–Houston we have a problem. Viva Chávez, Jr.!”

Canelo vs. Chávez, Jr. is a 12-round fight presented by Golden Boy Promotions and sponsored by Tecate, BORN BOLD, Adriana’s Insurance and Interjet. The event will take place on Saturday, May 6 at T-Mobile Arena and will be produced and distributed live by HBO Pay-Per-View® beginning at 9:00 p.m. ET/6:00 p.m. PT.