The 37 year-old earned a guaranteed check of $100m handed to him in the dressing room on fight night following his points victory over the Filipino, a figure that has since doubled due to add-ons from the PPV and record gate receipts from the MGM Grand clash in Las Vegas. 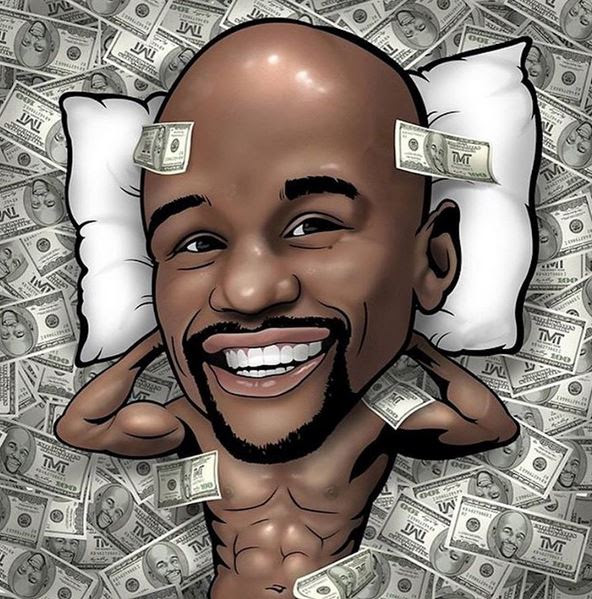 ‘MayPac’ is eventually set to hit around $600m, with Mayweather’s total reported to be around the $225m mark. Add to that the pound for pound best’s payday from his September rematch with Marcos Maidana, and it all adds up to a tidy sum for the ‘Money’ man.

Second on the list (picture below by Forbes) is Floyd Mayweather opponent Manny Pacquiao, whose purse of $100m plus extras and money from his dominant victory over Chris Algieri in Macau, China last November see the Filipino reach a total of $160m for the year June 2014 to June 2015.

Those sums show the domination of boxing’s earning power from such a high-profile match-up as world soccer stars Cristiano Ronaldo and Lionel Messi of Real Madrid and Barcelona are way behind Floyd Mayweather on $79.6 and $73.8 million in third and fourth respectively.

Fifth place goes to tennis veteran Roger Federer. Whilst the next American in line is Cleveland Cavaliers basketball star LeBron James on $64.8m.

James is followed by fellow NBA star Kevin Durant on $54.1m. Golf enters the fray at number eight as Phil Mickelson‘s $50.8m keeps him in the top ten.

Former number one Tiger Woods is only slightly behind his sporting rival on $50.6m.

Woods was once the record holder for a single year with $125m back in 2008. Although the fourteen-time major’s winner’s tally now pales into insignificance when measured against Mayweather’s huge figure for this year.

Rounding off the high end of the list is another NBA player in Kobe Bryant, who was just shy of the $50m barrier.

Bryant pocketed a sum ($49.5m) that Mayweather earned in just seven and a half minutes of his lucrative contest with Pacquaio.

An eye-popping statistic that only serves to crown the current king of boxing as the biggest name in sports.