The Italian-American is a staunch follower of his homeland’s football team, nicknamed the “Azzurri,” and let England supporters know his feelings on the matter.

Malignaggi is a well-known figure on English shores due to his previous meetings with Ricky Hatton and Amir Khan. He also worked for Sky Sports and has a slice of the Boxxer pie.

“The Magic Man” won’t be giving “Football’s Coming Home” chanters anything to cheer about until after the final whistle blows on Sunday, though.

He said: “Love my fans from England, but we are not on speaking terms from now until Sunday. There is too much at stake in Sunday’s Euro 2020 final.

“Not to mention that today your team benefitted from some very questionable refereeing. This was a European Cup semifinal in extra time, not A Sunday pub league game, and the referee has the audacity to call that a penalty kick when so much is at stake?

“The interpretation of VAR has to be more direct. This sport is becoming a joke, and modern attacking players are benefitting too much from this type of refereeing, so things like this will only enable this kind of behavior from players more and more,” he added. 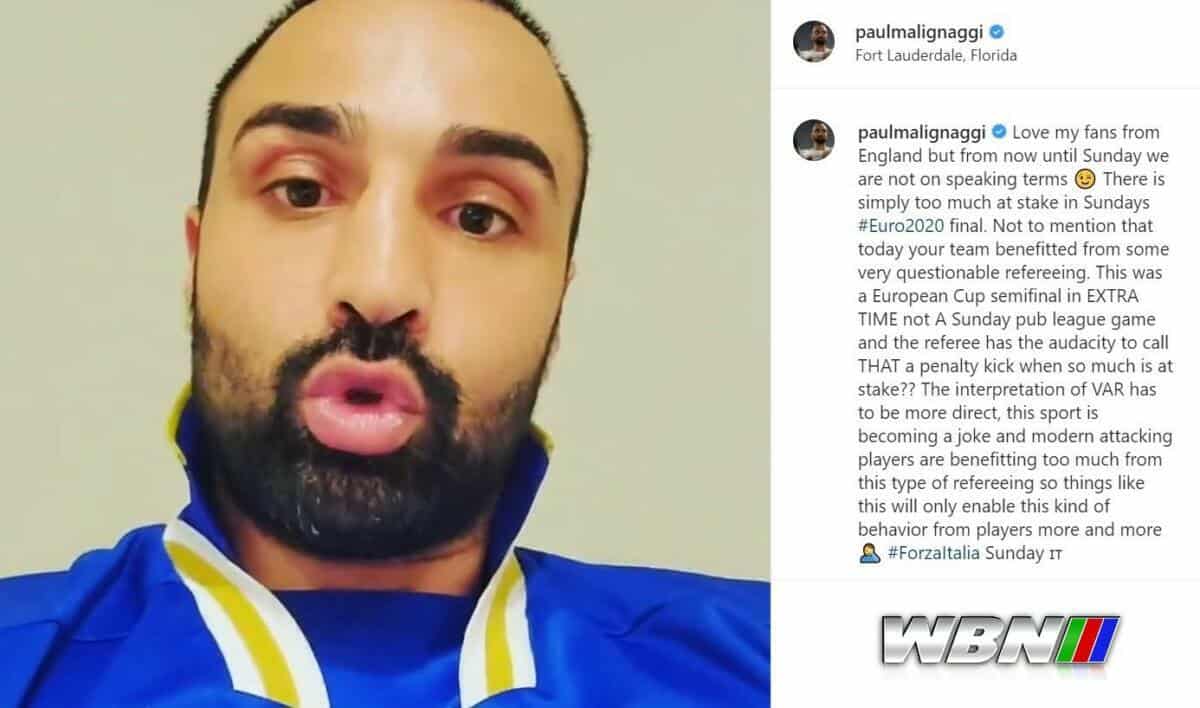 The New Yorker was alluding to a soft penalty awarded, which England captain Harry Kane dispatched via the rebound off Kasper Schmeichel.

England scraped through 2-1 to reach their first major final for 55 years. Italy now stands in the way of the first success since the famous 1966 World Cup-winning team.

Not since the days of Bobby Moore and Geoff Hurst have England had the chance to win a trophy. They also hold the home advantage at Wembley, as they did back then.

“Morning, what can I say? The voice is nearly gone, and I am not so sure by Sunday I am still going to like the song “Football’s Coming Home!”

“Gardening today, I am sure a man called Jack lived in this house before me and sprinkled magic seeds. Everything has grown in days. Have a good day,” said the former WBC heavyweight champion.