Making the announcement, promoter Frank Warren revealed that the European, Commonwealth, and British champion would face Carlos Takam in London.

At 1/7 with most bookies like OddsNinja.com, not many are impressed with the choice of opponent.

WBO-ranked Joyce begins the build-up to a huge night of action across the pond before Fury, and rival Wilder trade blows again in the final installment of their grudge saga.

Therefore, plenty of UK punters would have hoped a better caliber of test could have been found because Joyce is on the verge of a world title shot.

Takam, although solid and steady, is no longer considered a viable threat. Much like Derek Chisora, who defeated Takam himself, the Cameroonian is merely seen as a stepover to bigger things.

The one name that would have warranted a big summer showdown in the capital would have been Tony Yoka. However, WBN has learned that an approach to the Frenchman may have been well-received -had the terms been right.

But sadly, it wasn’t to be, and Joyce will almost certainly see out an expected victory before a possible rematch with Daniel Dubois comes calling. 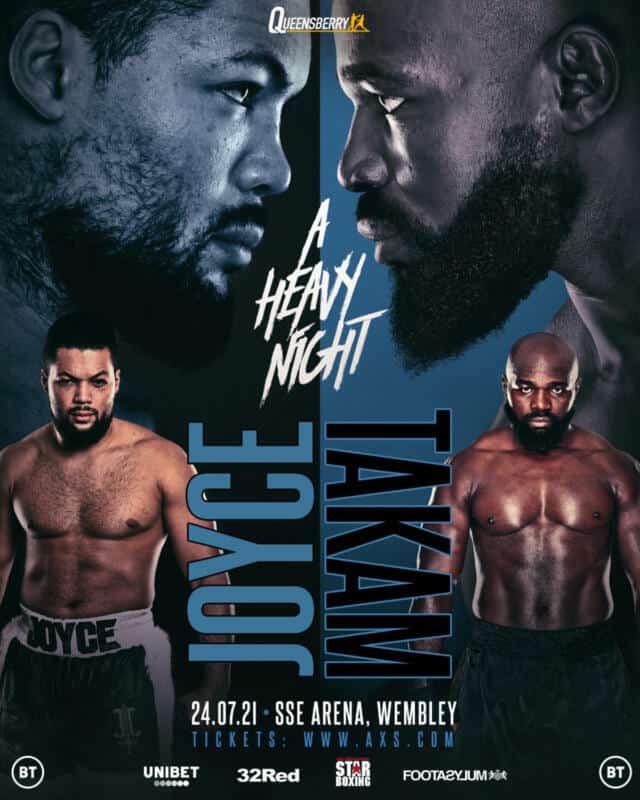 Warren was still upbeat when confirming Joe Joyce vs. Carlos Takam, though.

“It was a great win for Joe against Daniel Dubois. However, since then, he has been inactive because we have been waiting for the WBO title situation between Anthony Joshua and Oleksandr Usyk to be finalized. Had that [Joshua vs. Usyk] fight not happened, Joe would have been fighting Usyk for the vacant title, so we had to wait and see what the outcome would be.

“That situation has been sorted. Joe will become the mandatory challenger for the winner and get his world title fight – should he beat Carlos Takam.

“It is a testament to Joe’s character that he’d take a fight as difficult as this when a World Title fight is waiting around the corner.

“This is a dangerous, dangerous fight, and Joe needs to make sure he doesn’t let Carlos come in and take everything he’s worked so hard for.”

He concluded: “Joe cannot afford to slip up. He is in a tremendous position, but he has to be focused. We want to see an impressive performance from him.

“Everyone knows who Takam is. He really made AJ work when he came in as a late substitute. Plenty of people believe the stoppage was slightly premature.

“Takam is coming with ambition, and his recent record shows that the desire is there to succeed at the highest level.

“It is a good voluntary defense. However, given Joe’s position with the WBO, he could have taken far easier options than this.”