Up and comer Tommy Fury faces potentially his toughest test yet against an undefeated unknown quantity on the undercard of Daniel Dubois vs. Bogdan Dinu.

Jordan Grant, a 2-0 opponent from Scotland, hopes to give Tyson Fury‘s brother the shock of his life this weekend.

The Bellshill man represents the first foe with a winning record for Tommy Fury after the Love Island star’s last five victories held a combined C.V. of 12 wins, 174 losses, and 5 draws.

Fury faces a step up in class, not before time, in yet another light-heavyweight four-rounder. The bout takes place at Telford International Centre this Saturday night, live on BT Sport.

Grant’s all-action style promises to make it a tough night for Fury (5-0, 4 KOs), who trained in Miami for the bout alongside his big brother, the WBC World Heavyweight champion.

But there is no jealousy towards Fury, who has the backing of Hall of Fame promoter Frank Warren beside his reality TV fame and a world-famous family name.

Grant, 23, explained: “I respect any fighter, and I am not one for talking Tommy down. 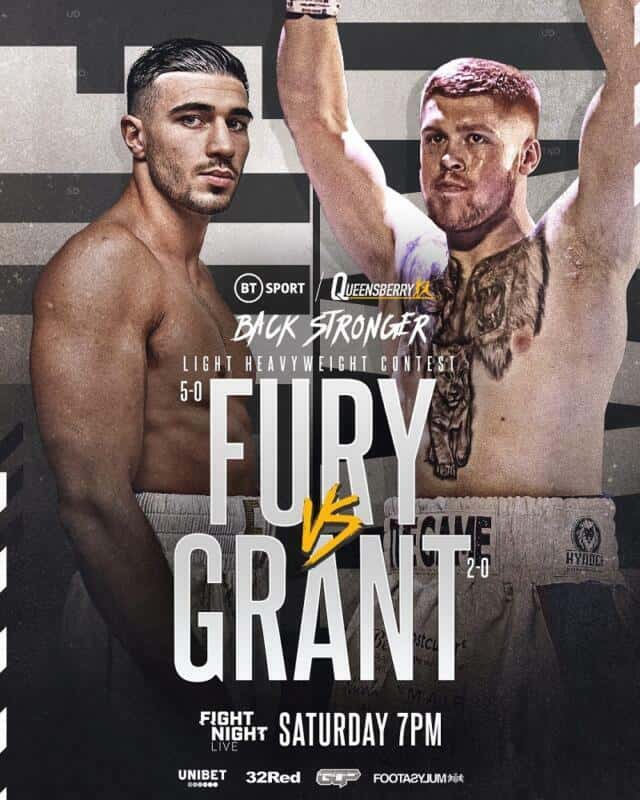 “He has done very well for himself and got the TV exposure, so fair play to him. It is a hard enough sport, so if there is a way to get your name out there and get sponsors to do it.

“These guys get paid to train and sponsored, so there is a total difference to me. I have two jobs to keep my family.

“So I am out digging holes during the day, and I am also a qualified tiler. So I do that at the weekend. Most of the time, it is a seven-day working week and training in the evening.

“This fight will help my career take off, and I might get the backing to become a full-time boxer, get the best fights, and put on the best show.”

Belfast’s Middleweight Caoimhin Agyarko (8-0, 5 KOs) is back. He will be aiming for his fifth successive inside the distance win when he boxes Mexican Ernesto Olvera (11-6-1, 3 KOs)