Chavez and Camacho as well as Omar Chavez and Ramon Alvarez were present at Tuesday’s festivities.

Julio Cesar Chavez, referring to the first time he was offered to fight with the son of his great rival, Chavez, a member of the Hall of Fame, said “First I said no, because he is too young for me. But when they told me it was a tribute to my great friend (Camacho Sr.), who is in heaven, I accepted immediately. ”

“Between Mexico and Puerto Rico there has always been a great rivalry, but “Macho” Camacho never bothered with my family, he never offended me or used rude words. And we became great friends, I love him to heaven, he knows it, and although now he must be angry about the beating I’m going to give his son.” 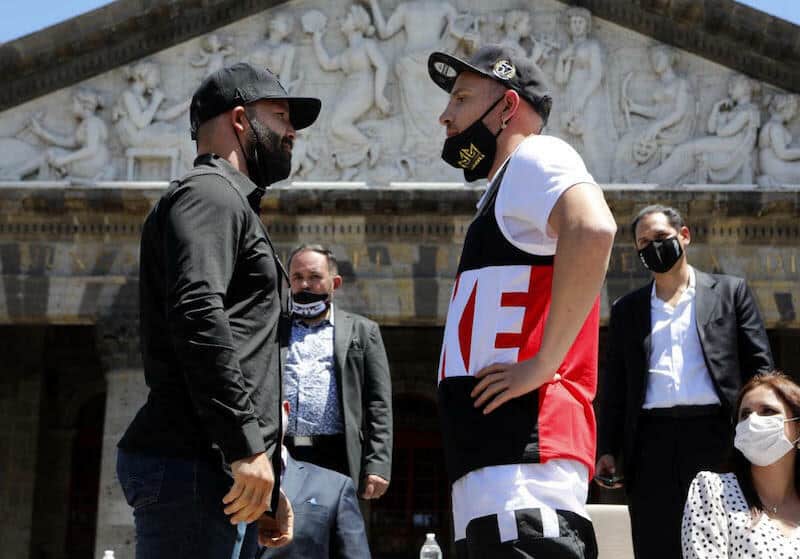 Hector “Macho” Camacho Jr thanked the authorities and the organizers of the event, and then added: “I have been waiting for the opportunity for this fight for years. I will be well prepared, very skinny as you like. This fight is going to be days before the anniversary of my father’s death, so it will be a very emotional fight for me.”

Tribute to The Kings will be live on Pay-Per-View and will feature a special Exhibition bout that will see Julio Cesar Chavez Sr. make his final ring appearance against Hector Camacho Jr. Camacho will be honoring the legacy of his late Hall of Fame father.

In this very special battle between Mexico and Puerto Rico, Camacho will look to get even from the historic bout that Chavez had with Camacho’s legendary dad on September 12, 1992.

In a 10-ound light heavyweight, former middleweight world champion, Julio Cesar Chavez Jr will take on an opponent to be announced.

In a 10-round middleweight bout, Omar Chavez will Ramon Alvarez in the rubber match of their trilogy

Tribute to The Kings is promoted by Borizteca Boxing and Toscano Promotions and will be produced by Global Sports Streaming.