Former middleweight rival Thomas Hearns has claimed Marvin Hagler’s death at the age of 66 was linked to the coronavirus vaccine he received recently.

Hearns, known as ‘The Hitman’ during his career, took to social media to report that Hagler was ‘fighting for his life in the ICU’ on Saturday.

The ex-boxer also added that Hagler was there due to the ‘after-effects of the vaccine.’

In a sad final statement, Hearns said he believed ‘he’ll be just fine, but we could use the positive energy and Prayer for his full recovery.’

Sadly, that didn’t happen, and Hagler passed away a short time later. Hearns’ revelation will be a massive blow to the continued roll-out of the vaccination program.

Reports in Europe of the AstraZeneca/Oxford vaccine causing blood clots in three patients already dealt a debilitating thud as countries have paused using the UK-based jab.

Social media conspiracy theories have gone into overdrive, and there will be some work to be done to assure those taking the vaccine that it’s safe. 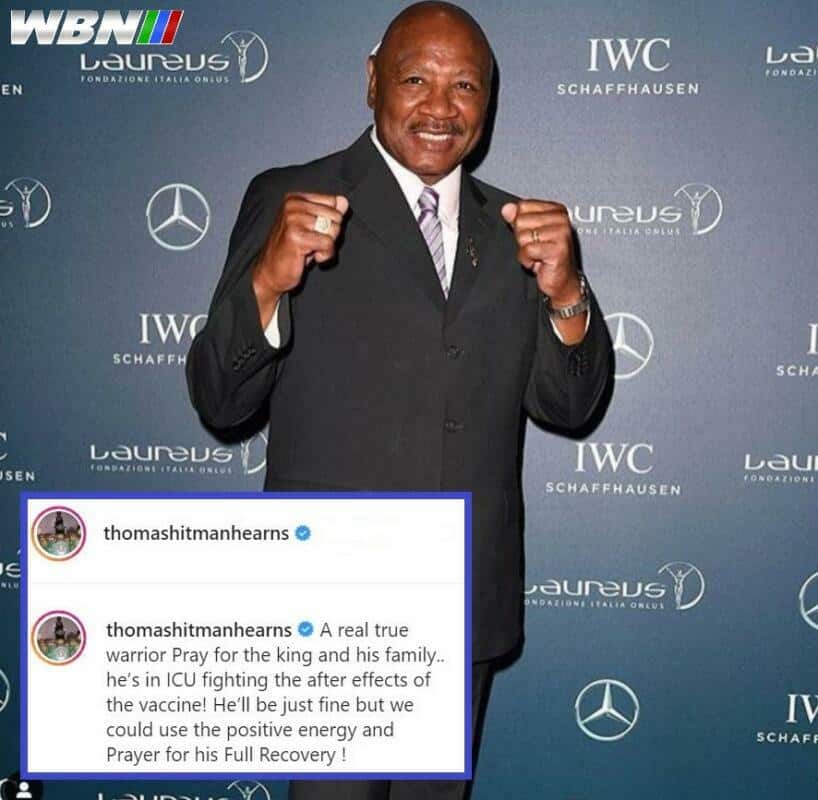 Hagler and Hearns met in 1985 inside the ropes. Their three-round battle was one of the most memorable, especially the first round.

Those three minutes have been labeled the greatest round of boxing ever by more than one publication over the years.

Tributes continued to flood in for Hagler as news filtered around the world on Sunday.

“He brought a lunch pail filled with power, guts, pride, will, talent and character. And he fought everyone, anytime, anywhere. And he was great.

Carl Weathers, the Hollywood actor who played Apollo Creed in the ‘Rocky’ saga, added: “RIP, Marvelous Marvin Hagler. So many fans held you in high regard.”

“I grew up studying this man & always trying to emulate the same ferocity and grit he would use to beat his opponents. You’ll be missed, Champ.”

“I’m very sorry to learn of the passing of the great Marvin Hagler.

“I was privileged to watch many of his greatest fights and was thrilled to meet him backstage at a WWE event in the late ’90s.

“We talked about our love of New Hampshire’s White Mountain.”

Furthermore, Marvin Hagler, we will miss you!