Parker is on course to battle Derek Chisora in a rearranged Pay Per View after confirmation talks were underway on both sides.

The negotiations come days after Parker improved his record by ending the undefeated run on the younger Fa.

They were originally due to meet in October 2019 in a co-feature with Josh Taylor vs. Regis Prograis.

Chisora was left stranded after a spider bite ruled Parker out late on. 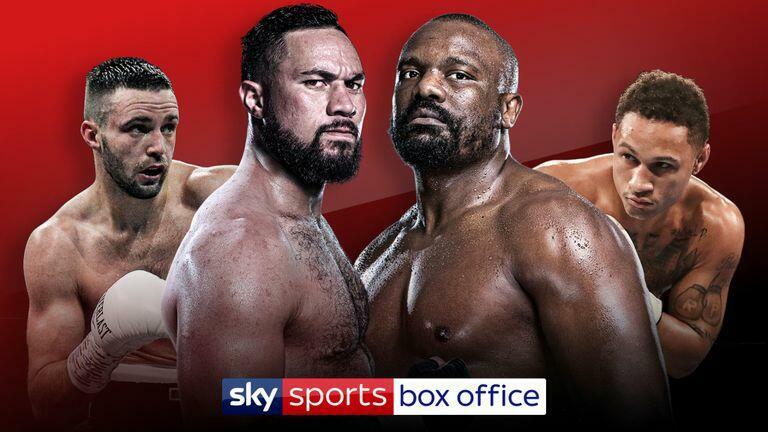 Boxing reporter Eric Armit picks up the results for WBN.

Parker takes a unanimous decision over Fa in a disappointing scrappy contest. In the first, Parker was coming in behind his jab and scoring to the body, but Fa then landed a hard right that stung Parker and did enough to edge the round.

The second and third scoring heavily when he had Fa against the ropes. Parker continued to fight to Fa in the fourth, and what little clean work was being done by Parker, with Fa holding every time Parker got inside.

Fa was sharper in the fifth, using his longer reach to keep his jab in Parker’s face and connecting with a solid right to the chin. Fa took the sixth.

He was more positive with his jab and mixing in some rights, but the continual clinching was spoiling Fa’s fighting. Parker had a good seventh connecting with his jab, some rights, and swinging left before being dragged into clinch after clinch by Fa.

Parker also outscored Fa in the eighth with piercing jabs and punched the body with Fa only looking to hold. Parker’s flying elbow opened a cut over Fa’s left eye in the ninth, and Parker took the round with some sharp jabs and clubbing rights.

The cut was still dripping blood at the start of the tenth, and Fa’s face was soon smeared all over with blood, but luckily the blood was trickling down the side of his face and not into his eye.

Despite the injury, Fa did what clean scoring there was. Parker took the eleventh; he connected with his jab and worked to the body with Fa, just looking to hold and doing very little work.

The first score looked too harsh on Fa and the last too generous with Parker a deserving winner in a contest without highlights with too little clean work and too much clinching. Parker wins the WBO Orient belt and is 3-2 up in fights with Fa as they were 2-2- as amateurs.

Parker was No 3 with the WBO and Fa No 5, so the former WBO champion will now almost certainly go on to fight Dereck Chisora in an eliminator.

Fa did too much holding and too little punching. He can come again but is unlikely to threaten Joshua, Fury, or Wilder.

Helu pulls off a surprise as he outpoints more experienced Charalampous. Little Tongan Helu rocked Charalampous in the opener, and Charalampous had to hold to survive. The fight became untidy, with Helu throwing less but dangerous, and Charalampous never quite able to subdued the Tongan, and it did not help that he lost a point for a low punch. Helu faded over the last two rounds in a hard fight to score but did enough to win the decision. Scores 58-56 and 57-56 for Helu and 57-56 for Charalampous, the third 57-57. Going into this one, Helu was 10-1 in his 11 most recent fights.

Local fighter Ahio climbs off the canvas to kayo Long. Ahio, at 6’0”, was 13 “inches shorter than the 7’1” Long and 97lbs lighter. He was frustrated early by his inability to reach high enough to do any real damage to the Michigan giant. Long’s “tactics” were to lean on the ropes or in a corner and let Ahio do what he pleased then push Ahio back and wait for Ahio to come back and do the same again. Ahio was so busy beating on the corpulent body of Long that he forgot to defend himself, and a right put him down.

The referee sent long across the ring to the other corner, which was the furthest that Long trod in the fight. Ahio was up quickly and went back to work. The tape from the wrapping of both boxers gloves came loose in the fifth, and Ahio’s was loose again in the sixth (There are solutions to this, guys). In the seventh, Ahio connected with left hooks until an exhausted Long pushed him away and then fell to the canvas on his back and was counted out. Ahio, 30, had outpointed Long in 2019. Based in New Zealand since 2013, Long, 43, is 0-5-1 in his last six outings.

Brief first pro fight for Nyika, one of the most promising young New Zealand fighters, came out of the amateur ranks in recent years. A right to the head put Maio down, and he was counted out after just 29 seconds, although complaining, with some justification that the finishing punch landed on the back of his head. The 25-year-old 6’6” Nyika won gold medals at both the 2014 and 2018 Commonwealth Games and will make a big impact as a pro. Maio, out of his class, outweighed and too small.

New Zealand’s former top amateurs get a quick win as Pampellone knocks out Amouta in the first round. The 24-year-old London-born Pampellone was a New Zealand amateur champion in 2018, 2019, and 2020 and a quarter-finalist at the 2019 World Amateur Championships. One to follow. Poor Amouta out of his depth.