The World Boxing Association has again caused mass confusion in the heavyweight division, and yet another ridiculous situation arises.

In what’s becoming a running theme with the organization, the top division doesn’t know whether it’s coming or going.

This weekend, the polarizing WBA ‘regular’ title will be on the line.

Mahmoud Charr, who has held the belt since 2017 without defending it, should be putting it on the line against number one contender and interim ruler Trevor Bryan.

There’s one big problem. Charr never agreed to the fight in the first place. The Lebanese-born puncher has claimed that promoter Don King, in cahoots with the WBA, is forcing him to travel to the United States during a pandemic.

Charr was struggled with his visa and didn’t seem in the right frame of mind. Nonetheless, this hasn’t mattered one bit to King or the WBA.

As Charr claims forces are conspiring against him to take away the meaningless belt, silence has fallen over the whole event.

The 36-year-old believes an announcement will be made at the eleventh hour, pitting Bryan against another King fighter in Bermane Stiverne.

At first, ex-WBC champion Stiverne had been pitted against Christopher Lovejoy on the card. That was until Lovejoy stated he’d never heard anything regarding the fight.

Lovejoy subsequently couldn’t agree with King about the battle. The disagreement came only after Lovejoy learning of the contest when seeing his name on the poster. 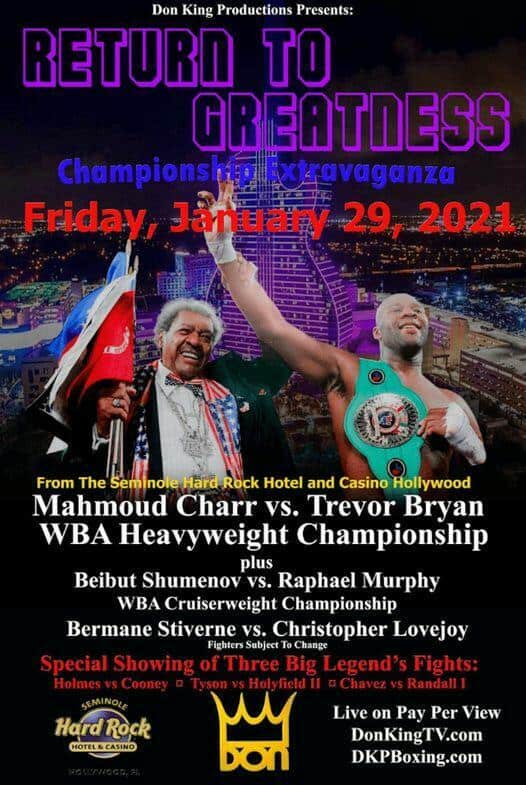 The whole even has subsequently turned into a complete shambles. WBA officials still haven’t made a ruling or been transparent in any way, shape, or form.

This latest development comes on the back of Charr, outlining earlier in the week that he expected to face Anthony Joshua next if he defeated Bryan.

Despite Joshua talking to Tyson Fury about an undisputed heavyweight encounter, Charr said he would push through his mandatory after this weekend.

Regarding AJ, this has happened before with Alexander Povetkin when a fight with Deontay Wilder fell apart. All due to the WBA ordering a mandatory at the eleventh hour.

You’d expect this to have a resolution. Not so, leaving fans, boxers, and champions in the lurch with just hours to go until the first bell.