Initially, Cleverly had been an avid Twitter user. He kept followers thoroughly entertained until backing away from the platform in 2018.

WBN wondered where Cleverly had gone with his new ‘G’ persona, which had tweeted belters like ‘Stay humble or become a w***er?’ – ‘I am the King of Wales’ plus many others.

Little did we know that Clev had retreated solely to Instagram, where he’d ramped up his posts to a new level.

Writing the revelation on Cleverly last month, it took nearly a month for the Welshman to share it with his fans. But in true ‘new Clev’ style, the ex-world champion made it his own.

Cleverly took out some of our words. Selecting the phrases liked to outline thoughts to over fourteen thousand Instagramers.

The first line originally read: “Into 2020, and Cleverly has adopted a ‘have fun before you’re dead’ attitude. Clev doesn’t give two f—- who he offends.”

Brilliantly, Cleverly altered it to, “Cleverly obviously doesn’t give two f**k who he offends.”

His next change was from the line, “Over the past few months, Cleverly has taken it to the extreme by posting several nude photos.

“Also making it no secret that he’s smoking enough weed to keep Mike Tyson happy, Cleverly is certainly living up to his ‘G’ persona.” 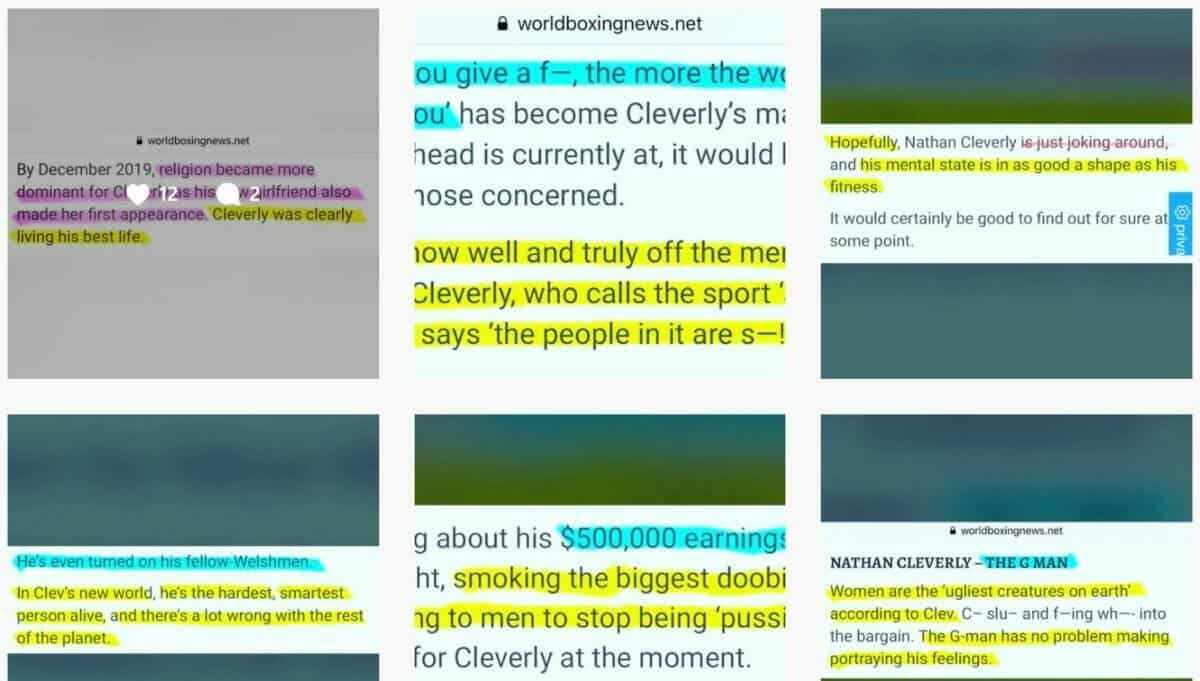 NATHAN CLEVERLY ‘LOVES BEING A W**KER’

WBN wrote the third as, “Then in the summer of 2019, a year on from his famous Twitter rants WBN has covered on more than one occasion, Clev went into overdrive.

Partying and wild ways were now the new post of choice as Cleverly declared in June 2019, ‘I LOVE BEING A W***ER’

His highlighting wanted to show everything from the ‘Clev went into overdrive’ onwards. The emphasis being on the ‘he loves being a w**ker’ bit.

Others paid attention to his controversial views that ‘women are the ugliest creatures on earth,’ the fact he ‘smokes the biggest doobies’ and likes to ‘preach to men to stop being pussies’.

Furthermore, Clev used his yellow overshadow to reinforce that he’s ‘the hardest, smartest person alive. There’s a lot wrong with the rest of the planet.’

The classic Clev we are learning to embrace. Let’s not take it too seriously.