One of the biggest and most important heavyweight fights in recent memory is now firmly in the hands of the World Boxing Organization.

The big talk of a massive undisputed clash between Anthony Joshua and Tyson Fury began in earnest as soon as the former stopped Kubrat Pulev in London.

Promoter Eddie Hearn has pointed out how simple the fight will be to make. But he did similar when Joshua was linked to facing Deontay Wilder in 2018.

We all know how that ended up. Joshua fought his mandatory in Alexander Povetkin.

Likewise, that’s once again the situation we find ourselves in. UK fans could be looking forward to a contest that is not possible.

What we need now is for the World Boxing Organization to come out and be clear and frank about what can and can’t happen.

Before Joshua took out Pulev in nine rounds, and frankly, before the title bout was announced, WBO President Paco Valcarcel stated that Oleksandr Usyk was next for AJ.

It took some communications between three parties to eventually get Joshua v Pulev over the line.

What we have never really been told is whether Joshua v Pulev was allowed to take place on the certain agreement that Usyk would be next. Contractually or otherwise.

If that was the case, everything that’s been said so far has been a smokescreen. That’s why the WBO must inform the public of what transpired during those negotiations.

Clarity is paramount when it comes to the UK side of things. If the Fury fight cannot happen due to an Usyk mandate, all have a moral duty to make this information public.

Leading the boxing fraternity into thinking Fury v Joshua is on the cards needs nipping in the bud. At least for the sake of finally securing a future encounter.

Let’s get a clear date of when it’s allowed to happen and get it signed for then. If Usyk has to be next, then announce it as soon as possible. 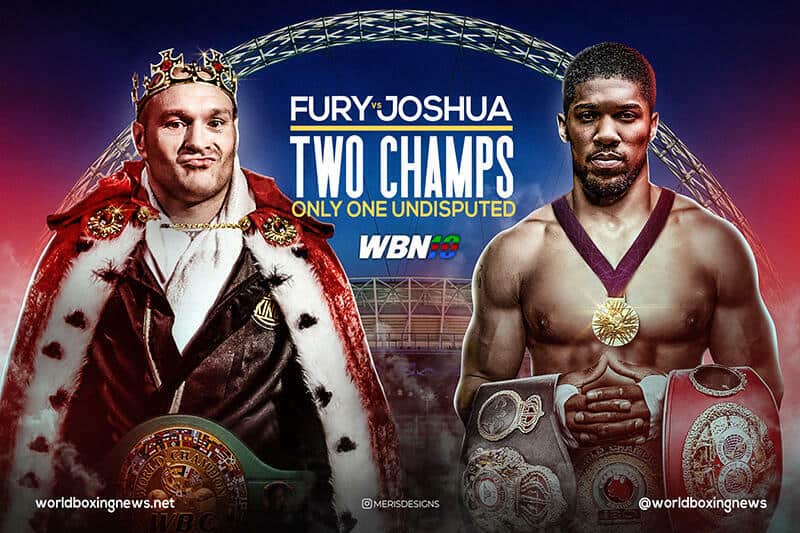 Maybe even put Fury out on the same night on a split-site event or even allow them to share a bill. A good old-fashioned build-up event not seen in some years.

That would certainly boost future Pay Per View sales.

Imagine Wembley Stadium hosting at half-capacity or even two thirds full around June before the pair then collide in a full stadium towards the back end of the year.

It has PPV record-breaking numbers written all over it.

But that needs to be outlined as soon as possible, so everyone knows where they stand. If it’s Joshua v Usyk and then Fury v Joshua there needs to be clear daylight on this fact.

Let’s not wait to confirm.

If not, the waters will continue to be muddied. False promises stay prominent until the WBO makes the outcome of Joshua’s next fight as transparent as possible.

So far, Valcarcel missed the opportunity to do this when he said, “As to the WBO belt, Eddie Hearn knows the meaning of commitment. The ball is in Hearn’s court.”

Without some interpretation, this could be Valcarcel telling Hearn Usyk must be agreed next. We don’t know what that means.

Fingers crossed we get some soon.