A massive poll for tonight’s welterweight clash on Pay Per View shows just how close a fight Errol Spence vs. Danny Garcia could prove to be once the dust settles.

Despite being a huge bookmaker favorite for the fight, Spence only managed to take a short margin of victories from 36 boxing star predictions.

In part three, following on from Evander Holyfield, Bernard Hopkins, and coaches, plus the welterweight ranks, there’s a mixture of the remaining thoughts.

See below before the final tally is revealed.

Garcia W 12: It’s basically a 50-50 fight, but I’m leaning toward Danny Garcia to defeat Errol Spence in a close fight. I’m pretty sure that Danny’s locked in an extremely motivated, feeling as if everyone is looking past him.

Spence SD 12: This is a crossroads fight for both of them. Errol Spence wants to demonstrate that he’s still the great champion that he was before the car accident, and this may be one of Danny Garcia’s greatest opportunities to show he still is a great champion.

It’s going to come down to who can dictate the pace and the pressure. I think Errol’s pressure could be too much for Garcia, but Spence had problems with the pressure Shawn Porter applied as well. If Spence invests in the body against Danny Garcia, his body shots can slow Garcia down and give Spence the edge. On the other hand, Garcia has that eraser of a left hook. But I’m giving Spence the edge and a decision.

Garcia SD 12: I see Danny Garcia winning a close, split-decision over Errol Spence. Garcia’s the underdog again, but how many times have we seen this? Garcia was supposed to lose to Erik Morales, Lucas Matthysse, Amir Khan, and so many others, but he beat them all. Spence is talented, but I see Garcia fighting with that Philadelphia pride and bringing another world championship home.

Spence W 12: A lot depends on whether Errol Spence is 100 percent after his car accident. But either way, I anticipate him using his height, reach, and ability to fight from a distance. Spence will counter Danny Garcia’s power and mid-range fight abilities on the way to winning a close decision.

Spence TKO 8: If Errol Spence had not been in that car accident, I would have picked him to defeat Danny Garcia, hands down. But now it’s a 50-50 fight because we don’t know how he’s going to come back from the injuries, physically and mentally.

But it seems like Errol’s 100 percent ready to take on the big task of Danny Garcia for the simple fact that his boxing abilities are far superior. I think it’s going to be a stoppage. With his skills, Errol Spence knows how to pick you apart round by round.

Danny Garcia’s vulnerable because he’s a guy that’s a big puncher who is always in a fight during any given round, but he opens up a lot. I see Errol Spence out-boxing and breaking him down for a TKO, say, by the eighth round. 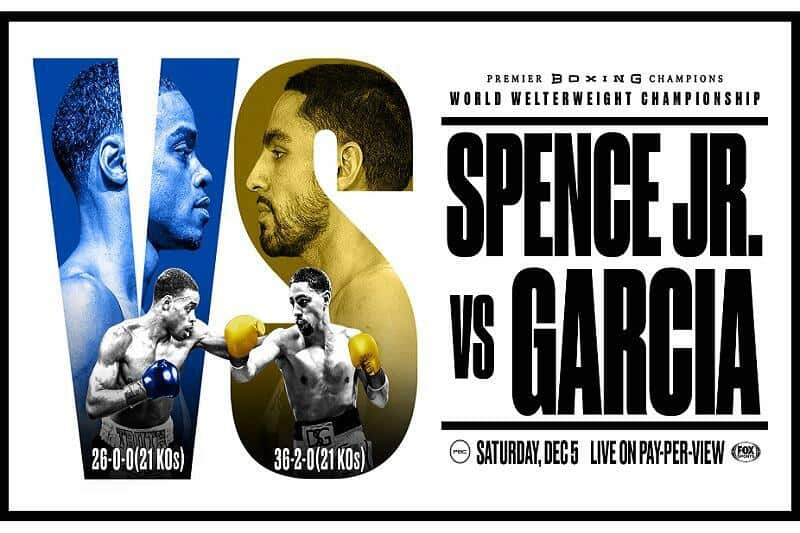 Spence W 12: I think Errol Spence may get him, but he can’t mess around. Danny Garcia’s only got a puncher’s chance. Danny has been looking a little sharp and crisp. I edge it out to Errol, but it’s not going to be a walk in the park.

Garcia W 12: This fight will be Errol Spence’s biggest fight. I like Danny Garcia in this fight, personally. Spence can’t go to the body and not get hit. If Danny gets close enough to hit Spence, he is going to fire. Danny has power in both hands. I wouldn’t be surprised if Danny upsets Spence.

Spence W 12: Danny Garcia has the puncher’s power to stop Errol Spence, but I believe Spence is too much for Danny. Spence is too aggressive and has too much dog and tenacity for Danny. I’m just worried about which Errol will come to fight. Will the old Errol be able to perform to his old standard before his accident? I feel like Errol can win this fight.

Spence W 12:  Both Errol Spence and Danny Garcia are phenomenal fighters. Style makes fights. Errol Spence is more agile and more of a boxer-puncher. Danny is more of a poised, counter-puncher, and seasoned boxer with more in-the-ring experience.

Danny has more of a puncher’s chance, having fought champions and ex-champions, beating most of them. Errol definitely has a puncher’s chance to go with a high IQ and the ability to lure Danny into a position where he can hurt Danny. Errol can knock Danny out with a hard punch or a slew of hard combinations, but Danny could catch Errol with a counter punch so that the fight could go either way. Still, I’m leaning toward Errol Spence, who has more in his arsenal than Danny.

Spence UD 12: I see Errol Spence winning by a unanimous decision over Danny Garcia because Garcia’s got a granite chin, and we’ve never seen Garcia buzzed, battered, or hurt.

Garcia W 12: This places me in a challenging position because this is a 50-50 fight, a tough fight to pick, and Errol Spence is the hungry, younger fighter who has many skills. But if I have to pick a winner, I’ll go with the underdog, Danny Garcia, because I believe many people are underestimating him, and guys like that can tend to sneak up on you. That’s why I’m picking Danny Garcia to rise to the occasion and win a great fight.

Spence W 12: This will be a fun fight to watch because both Errol Spence and Danny García are true warriors. Spence is the naturally bigger man and has more tools in his box.  Garcia is tough, but I think Spence will be too much for him. Spence wins by decision.

Garcia W 12: Danny Garcia is a smart, great fighter, and I like how he thinks. I say Danny Garcia wins by decision over Errol Spence.

Spence D 12: If Errol Spence isn’t affected by the car accident, I have him winning a unanimous decision over Danny Garcia. We already know Danny’s going to come to fight and seems more focused than ever. Going off of what I only know right now, I’ll say they’re going to fight to a draw.

Garcia SD 12: I respect Errol Spence for coming back from that car accident and accepting such a tremendous challenge in Danny Garcia, but there are many questions about which Spence will show up after his accident.

I think Spence should have taken a tune-up fight to see where he was before stepping up to this level. I’ve seen up close that Garcia’s one-punch knockout power is special, and I think that will be the difference in him winning a close, split-decision.

Spence TKO 10: Errol Spence is the best fighter in the whole division, and I believe he’ll come into the ring wanting to prove that in a great fight against Danny Garcia. I know Spence was involved in that terrible car accident after beating Shawn Porter, but I think he can knock out Garcia.

Spence UD 12: Errol Spence and Danny Garcia are two champions with great chins and good defense, but I’m picking Errol by decision just because of his work-rate.

In the fight, Danny will counter effectively and avoid taking too much damage because of his solid defense, but again, he won’t sustain the work-rate with Spence.

Garcia SD 12: Errol Spence is still a great fighter, regardless of what happened with the car accident. But I believe the night will belong to Danny Garcia. I expect Garcia to start fast, pressuring early and using his patience and power to control the fight on the way to winning.

Of those polled, 20 predicted that Spence would retain his titles. At the same time, 16 favored Garcia to come out with the victory on Saturday night.

Whether that has anything to do with the car crash Spence luckily walked away from in late 2019 remains to be seen.