The LeRoy Neiman and Janet Byrne Neiman Foundation and Seasons are pleased to announce Age Before Beauty, an exhibition of LeRoy Neiman’s sketches from the Rocky films’ set, staged at Gleason’s of Brooklyn, the world’s most famous boxing gym.

The show opened as an immersive online experience at Seasons on November 27, the 35th anniversary of Rocky IV’s debut in theaters, and remains on view through January 10.

Today Neiman is best known for his expressionistic paintings of musicians and athletes, particularly those of boxers. Still, he became a household name in postwar America through his drawings, and the rare sketches on display in Age Before Beauty demonstrate why. Through Neiman’s skilled hand, Sylvester Stallone’s face on the receiving end of punch becomes a Da Vinci-Esque anatomy lesson.

Carl Weathers is captured in a private moment, a work that manages to convey a profound feeling of the calm before the storm, despite its having been dashed off on a call sheet.

Neiman could create detailed and cinematic sketches of sporting events as they played out before him, a skill he often performed on live television. He captured the Olympics and regularly appeared as an anchor on ABC’s Wide World of Sports.

It was likely this ability, and notoriety, that led to his cameo as an artist sketching fighters sparring at a gym in Rocky II. Neiman would often befriend his subjects—his relationship with Muhammed Ali dated back to his coverage of the Cassius Clay-Sonny Liston fights that gave the former his heavyweight world championship in 1965— and his subsequent friendship with Stallone led to roles in Rocky III, Rocky IV, and Rocky V as a ring announcer. 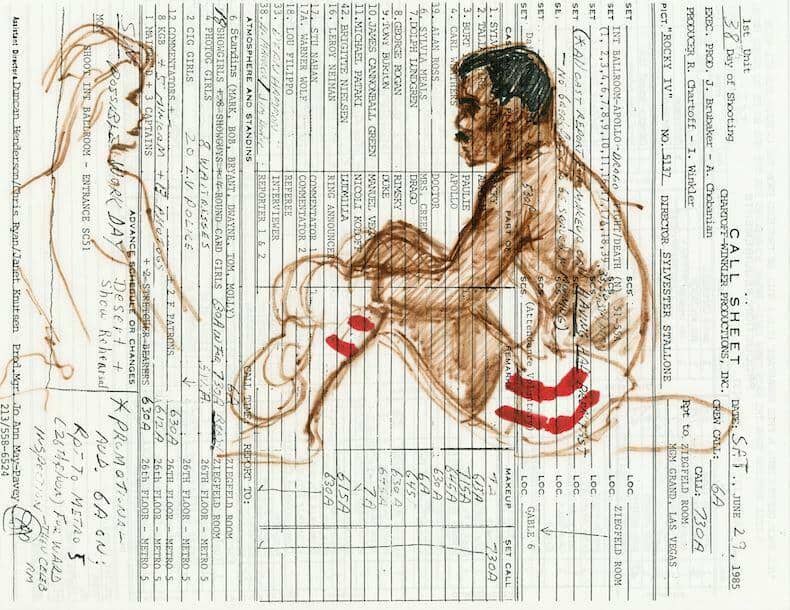 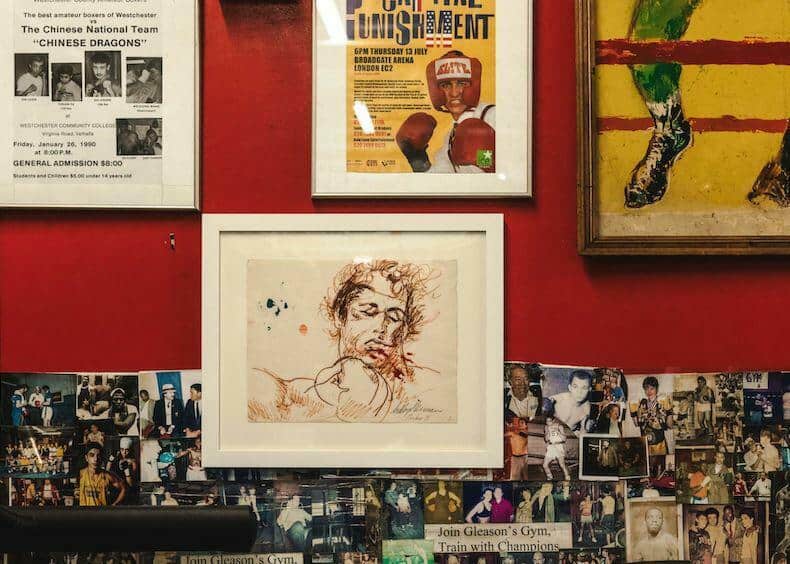 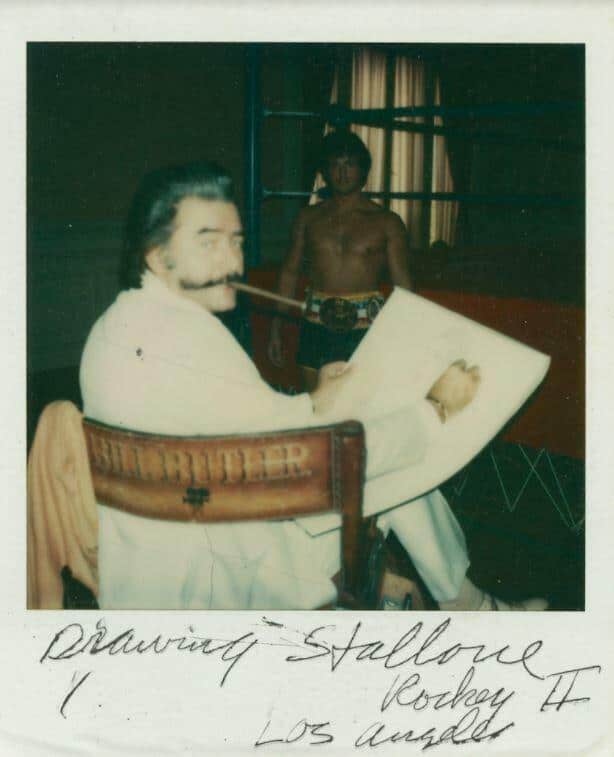 In his memoir, Neiman describes his tableau of Stallone standing over Dolph Lundgren’s defeated Ivan Drago at the end of Rocky IV as inspired by Géricault’s Raft of the Medusa. The show’s title comes from the last scene in Rocky III: Rocky offers Apollo Creed’s first entry into a ring for a friendly sparring match that ends with swinging at each other and turning into a LeRoy Neiman painting, over which the credits roll.

“LeRoy loved being on set for the Rocky movies, which brought together so many of his favorite themes,” said Tara Zabor, executive director of The LeRoy Neiman and Janet Byrne Neiman Foundation. “Boxing, celebrity, friendship, underdogs… it’s all there on the screen, in big, dramatic colors. I’m pleased we were able to bring these works out of the archive, and I know he would have gotten a kick out of seeing them posted around Gleason’s.”

One sees the 25 works positioned all over the gym in the online experience—in the ring, on workout equipment, and alongside a Neiman of two anonymous sparring partners painted on the tin that he previously donated to the gym. Viewers may be struck by how naturally the works fit in amongst Gleason’s sweaty communal gloves, storied memorabilia, and vintage LeRoy Neiman match posters.

The exhibition also features an accompanying text by film director Andrew Bujalski, expanding on his “unified theory of the Rocky movies” as penned for the New Yorker in 2015, where he noted: “Among blockbuster franchises, ‘Rocky’ stands out as surely the unlikeliest. How many other Part 7s can you name with nary a gun or spaceship insight?

In its very human focus, the ‘Rocky’ series is, oddly, the closest analog that American cinema has produced to François Truffaut’s Antoine Doinel cycle.”

All photos courtesy Seasons and the LeRoy Neiman and Janet Byrne Neiman Foundation.