Bob Arum may have had no involvement in the first Deontay Wilder v Tyson Fury match-up, but the Hall of Famer promoter had a vision to make a rematch even bigger.

Speaking to WBN, the Top Rank boss outlined his initial plan to make Fury one of the biggest names in the United States.

Arum made a late move to stall an initial agreement for a Wilder return on May 18, signing Fury to a massive multi-fight deal.

Part of that contract was the chance to delay facing Wilder again. Arum wanted to build ‘The Gypsy King’ up stateside in a bid to maximize exposure for the second encounter.

Ahead of Fury’s Las Vega debut against Tom Schwarz on Saturday, the 87 year-old’s plans are seemingly coming together nicely.

“The problem (in the first Deontay Wilder fight) was only boxing fans knew Fury,” Arum exclusively explained to World Boxing News. “Through the fight build-up (for Schwarz), he’s been with the Los Angeles Football Team. He’s been around CNN and everything else that goes with it.

“People are beginning to learn who Fury is. That makes it a gigantic event when he fights Wilder.” 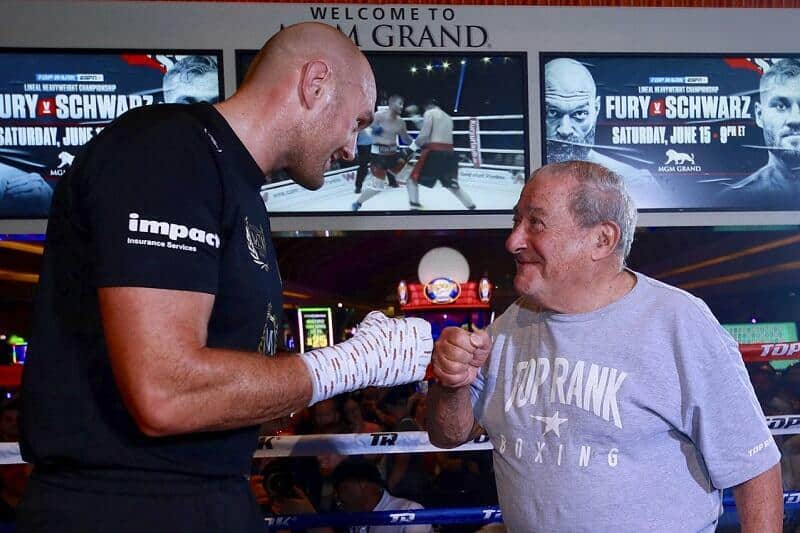 On Fury’s pre-fight entertainment value and what will be a solid card at the MGM Grand, Arum added: “He’s got a tremendous personality and he’s a pleasure to be with. He’s also very intelligent.

“It’s going to be a great event with a massive audience on June 15th. It will be sold out.

“We have a great card with Sullivan Barrera and Jesse Hart, a great light-heavyweight fight. We got Mikaela Mayer and good heavyweights. There’s Guido Vianello, the Italian heavyweight – he’s on the card. Sonny Conte, an American heavyweight.

“It’s going to be a great card and I’m really looking forward to June 15th,” he concluded.

Fury is gathering pace as a force on US shores, with a second outing under the Top Rank banner planned for the fall.

Another ranked opponent is on the cards, should Fury deal with Schwarz in the manner expected in Nevada.

Wilder is penciled in, and for the most part, agreed for early 2020. All Fury has to do is avoid a shock loss to the big, undefeated German.

With tens of millions on the line, Fury seems to be without a care in the world. It’s hoped this will be reflected in his performance.