‘Time waits for no man’. Except maybe it does for multi-time world champion, Zab Judah (44-9). At 41 years of age and as fit and strong as he’s ever been, he’ll continue to fight at the weight he fought at more than a quarter of a century ago.

On June 7th, he’s back. As part of the IBHOF 30th anniversary weekend, he’ll battle Cletus Seldin (23-1) in a super-lightweight bout at the Turning Stone Event Center in an event promoted by Star Boxing.

Judah took some time out to chat with me over the phone ahead of his comeback.

It’ll be almost eighteen months away from a professional ring for Brooklyn’s Judah by the time fight night arrives. And with just one other bout since his 2013 loss to fellow Brooklynite, Paulie Malignaggi, it would be fair to think that Zab has been preparing for life outside the ring. Quite the opposite, in fact. He’s in as good shape now as he ever has been and he’s hungry to fight.

“In the eyes of the boxing world, I’ve been away from the ring. But my team and everybody that go to my gym, they know I’ve been in the gym month after month,” Judah exclusively told World Boxing News.

“Any time anyone sees me, they want to know how it’s been 24 years and you still fighting in the weight class that you came into the game at in 1996.

“I came into the game in 1996 as a professional at 140lbs. It’s 2019 and I’m competing. Still campaigning at 140lbs! They always say, ‘Zab Judah’s not disciplined’, but if you don’t call that discipline – I don’t know what discipline is.”

“Let me put a little bit of butter on top of the croissant. In 1993 I won my first Golden Gloves at 139lbs. I’ve seen Madonna take off for 3-4 years and turn into the Goodyear blimp!”

Taking into consideration the extremely high level of competition that Judah has shared the ring with, it would probably be fair to say that his opponent on June 7th, Cletus Seldin, a man nine years his junior, is someone he would be expected to deal with comfortably. Not surprisingly, Zab agrees.

“He’s another notch on the ‘Super’ Judah list. He’s going to cross my T’s and dot my I’s into my Hall-of-Fame situation. Let the world know that in 2019, Zab ‘Super’ Judah was still known as one of the best pound-for-pound fighters in the world.”

“We don’t have no plans for the next fight right now, but what we’re going to do is annihilate Cletus Seldin and then after that annihilation, we’ll see.” he proudly proclaimed. “Hopefully we’re not convicted on no charges or anything like that, and then we’ll see what the world holds next for us.”

Coincidentally, his earlier mention of the Hall-of-Fame is particularly relevant with the battle headlining a fight night that’s part of the IBHOF 30th anniversary weekend festivities. In all honesty, it probably won’t be long before we see ‘Super’ Judah grace Canastota’s prestigious Hall-of-Fame.

“I guess whenever the time comes where the big man asks me to hang it up. I’ll wait five years ’til then and we’ll proceed on the Hall-of-Fame.” 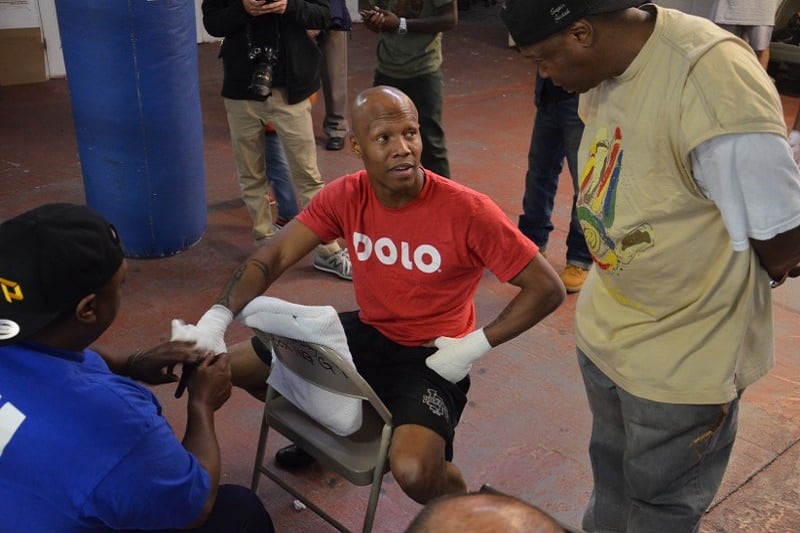 Talk then inevitably turned to retirement. As soon as I mentioned it, I began to sense how much the passion still burns within him. That hanging up his gloves is something very, very far from his mind.

“You’re only as old as you feel. I learned that the power of words is super-powerful. The moment you start uttering out your mouth that you’re old or getting older. When you put that in your mind and the universe – your body reacts to that.”

“My motivation comes from what we call ‘tomorrow’s champions’. The up-and-coming fighters. These are the guys that are telling me, ‘Zab, don’t quit’, they can’t hit me. My power’s still dynamite. I’m still dropping guys in the gym. Just because people haven’t seen me inside the ring, that doesn’t mean that I haven’t been working on my craft every single day.”

He’s shared the ring with a who’s who of fighters at super-lightweight and welterweight throughout his career. He began to reflect on some of his biggest nights, some of which, unfortunately, ended in defeat. Despite some negative results, he still enjoys dialogue with boxing fans about those nights.

“Every training camp, every endeavour, every fight, every situation is always special. Every fight has a different memory and a different part of history.

“Like now, people are just starting to understand (my career) saying, ‘we watched the Mayweather fight and if you really look at it, if you’re being fair and honest, he should have a loss on his record. We watched the Cotto fight over and over. As soon as you started digging his a** – he low blowed the s*** out of you – not once, but two times. The referee did nothing to think about helping you.

“We watched the fight with Amir Khan who just did the funky chicken dance against Terence Crawford. We saw him get punched in the thigh and quit. Then we go back to the fight when he fought Zab Judah. We can clearly see a shot in the middle of the cup. It jumped the cup into Zab’s balls and that was a real low blow’.”

“As time goes on and things come clearly to light, people will start to see more and more like, ‘wow, you really got some raw deals’. What keeps me motivated and keeps me going is my fans. My fans, no matter where I go in the world, they say, ‘we don’t give a s*** what the records say – you’re known as one of the best pound-for-pound fighters in the world’. That’s all I can ask for. It makes me happy.”

It might be quite an obvious question, but given the chance of a rematch with any of his previous opponents, who would he choose?