Former Army boxer and U.S. Military veteran Corey Goodwin had a vision of continuing to work with the military boxing programs and providing entertainment for the troops.

After providing several successful on post amateur boxing events and a solid pro show last August, Goodwin is realizing his dream and on March 21, 2019, Goodwin and his Force 1 Promotions will kick off the first of ten scheduled events as part of his Thursday Night All-American Pro Boxing Series.

The All-American Pro Boxing Series will take place on the third Thursday of every month at the Sports USA facility on Fort Bragg, and will feature some of the best young professional boxing talents from all over the United States.

“Boxing is still a big thing in the military, so I want to bring back boxing in an old school way, but give service members the opportunity to see exciting young talent live and in person before they fight on TV for big money,” said Goodwin.

While the shows at Fort Bragg are limited to military personnel and anyone able to get clearance on the base, Goodwin is currently working out a deal with North Carolina based streaming service C Sports and Entertainment (CSETV) to Live Stream all of the events from the Sports USA facility beginning with his April 18th show. 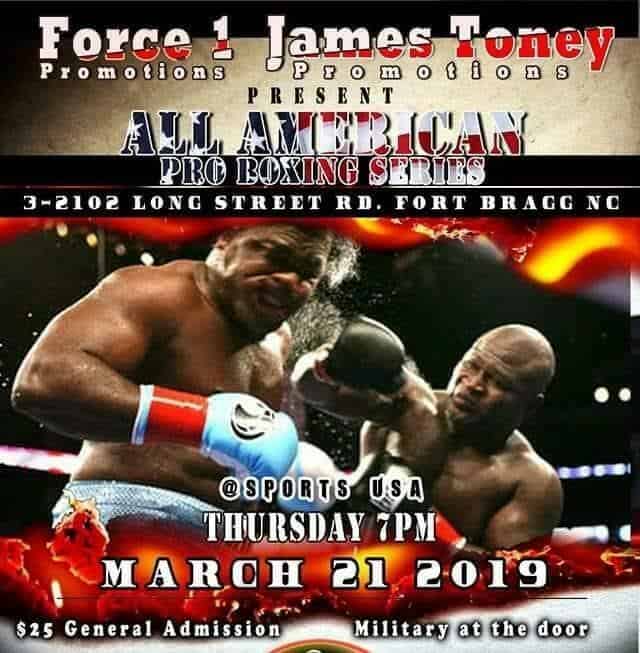 The March 21 show will feature a very special appearance by legend and former world champion James Toney. The live action in the ring will also have a legend theme when Antonio Tarver Jr faces Jermaine Corley in the main event.

Tickets for the All-American Pro Boxing Series are priced at $35 for General Admission and $65 for VIP. Tickets can be purchased online at https://bit.ly/2IVDd8g or by calling (678) 665-3526.  **Any non-military personnel purchasing tickets and wanting to attend MUST get clearance at Fort Bragg prior to March 21**