Anthony Joshua is on the receiving end of a backlash once again after over a year of rebuilding his public persona.

The heavyweight champion was roundly criticized in late 2017. His social media activity, sent out to millions of followers, came under question.

Firstly, AJ made comments to fellow-pro Eddie Chambers. The Londoner blasted the American as a ‘b****, bum and disgrace to the superior black race’ when sending Chambers Instagram messages.

Furthermore, the 2012 Olympic gold medallist’s SnapChat then caught the eye. This was due to Joshua asking fans bizarre questions regarding ousted Zimbabwean dictator Robert Mugabe.

“Why do they despise Robert Mugabe?” – asked Joshua whilst on holiday in Dubai. “Mugabe… is your view what you’ve been told?

“Or what you have learnt through research? – Or what you’ve been programmed to know via media outlets?”

Joshua’s reputation was largely untouched. Apart from some extended trolling on Twitter and Instagram. The 29 year-old has since brushed off the problematic actions.

This latest row, involving one of the world’s most famous figures, threatens to run and run until Joshua issues some sort of acknowledgment. 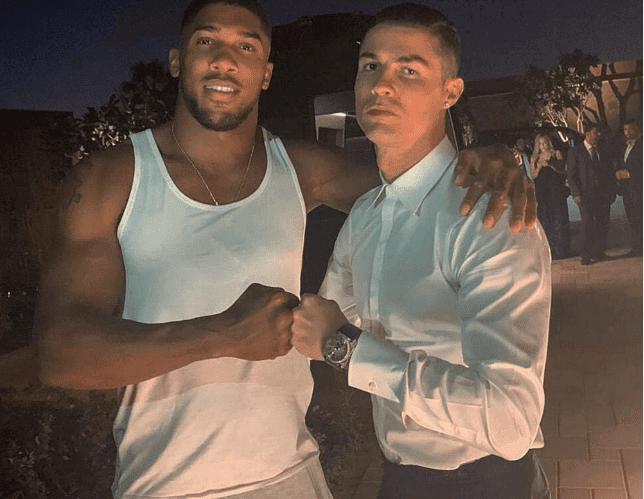 Speaking at the promotional tour for his US debut against Jarrell Miller, Joshua most comments regarding the rape allegations made against Cristiano Ronaldo.

The Juventus star has had bad publicity himself in the form of tax avoidance and a Las Vegas incident. Both of which Joshua touched on when praising Ronaldo as one of his heroes.

“I’ve always said two things you’d get f***ed for as an athlete is women and tax,” said Joshua. “He’s got f***ed for both. He’s still smiling, still strong,” he added.

Joshua continued: “You need mental strength, he’s proved that. He’s a family man, he’s got that aspect. But still out working and he’s dedicated to what he does.

“So as a sportsman he’s had the issues of one side, he’s got the family on the other side. He balances what he’s passionate about. He completes all the packages, so I like Ronaldo for that reason.”

Rape campaigners across Britain have widely panned Joshua for his comments. One in particular branded Joshua ‘insensitive and disrespectful’.

“It’s inappropriate, insensitive and disrespectful to make jokes or flippant remarks about allegations or instances of sexual violence and abuse in any context,” Katie Russell, the Rape Crisis England and Wales national spokeswoman told The Telegraph.

“Arguably, those in the public eye, who may be considered a role model to many, including impressionable young people, have a particular responsibility not to trivialise such serious issues.

Ronaldo has denied all allegations against him. Issuing a statement to the press and his fans on his social media accounts.

“I firmly deny the accusations being issued against me,” said Ronaldo. “Rape is an abominable crime that goes against everything that I am and believe in.

“Keen as I may be to clear my name, I refuse to feed the media spectacle created by people seeking to promote themselves at my expense.”