The World Boxing Council’s Clean Boxing Program has released its findings for January following a busy start to the year.

WBC President Mauricio Sulaiman made it one of his main goals to have a system implemented once voted in five years ago.

For the past couple of years, the CBP has grown and is a fully functioning part of the rankings.

Any fighter not enrolled faces removal from the Top 15. They would then miss out on a potential voluntary shot at the title.

Last month, 22 tests were carried out. Only one came back negative.

Announcing their results, the World Boxing Council stated: “The CBP Program is implementing a variety of necessary actions to keep the boxing community fully appraised about the activity of this unique and vital program.

“Its main objective, apart from conducting tests, is to educate athletes about the extreme dangers. Also, the considerable disadvantages that doping can cause.

“This is in addition to the penalties for positive tests detecting prohibited substances, inside or outside a competition.

“The program that has been planned, designed, and developed with countless hours of hard work, expertise, and dedication. Many dedicated members of the WBC and VADA are involved.

– Prevention: To educate and advise boxers about the genuine dangers of prohibited substances and the tragic effects leading to consequences they may bring about in the short and long term. This is done through tutorials, seminars, and forums.

– Random tests out of competition

In January, VADA carried out the following tests. This is the activity report: 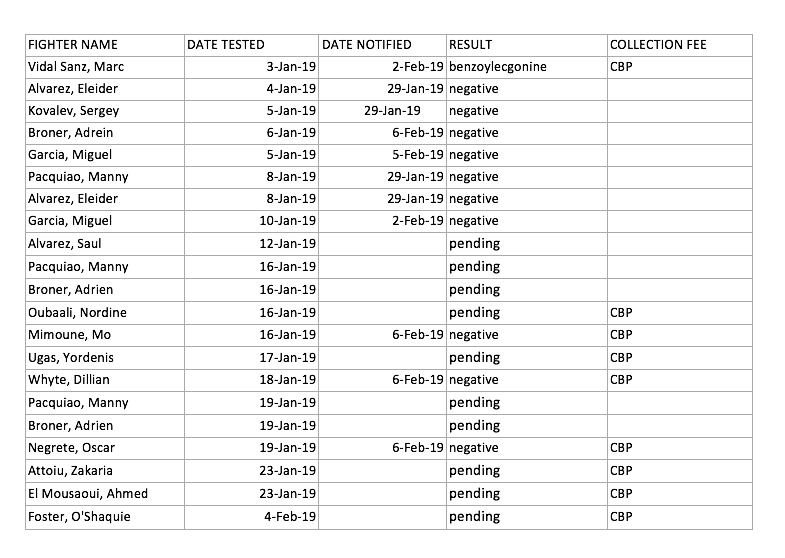 Tests for some of the biggest names in the sport are due back from the lab in the coming weeks.

Furthermore, Canelo Alvarez, Manny Pacquiao, and Adrien Broner are among them.