In front of a packed house at the famed AVALON Nightclub middleweight contender Maricela ‘La Diva’ Cornejo of Los Angeles, CA improved to 13-3 (5 KOs), with a strong performance against cross-town rival Erin Toughill, (7-4-1) of Huntington Beach, CA winning an eight-round decision by scores of 79-73, 79-73 and 78-74.

With the crowd on their feet cheering throughout, Cornejo and Toughill exchanged power shots from the opening bell with neither willing to move away from their determined efforts to win each of the two-minute rounds.

Fighting at a very fast pace throughout the first half of the clash, Cornejo would take control in the fifth round scoring numerous heavy-handed body shots which continued into the sixth stanza.

The last two rounds validated the early line of this being a highly competitive fight when it was originally announced as neither fighter gave an inch landing bombs continuously up until the final bell.

“She’s a very tough opponent and a very well-trained athlete,” said the victorious Cornejo. “It was a fun fight; a real fight and we both have mutual respect for each other. She had very good counters early on but I was able to increase my volume of punches which helped to win the fight.”

Said Toughill, “It feels great to be back, I’m happy with my performance. Congrats to Maricela(???? Lina Baker) , she earned this win, tonight was truly what fighting is all about. I could have thrown more on the inside but I felt I closed strong in the last two rounds.

In the action-packed co-feature, top welterweight prospect. Brooklyn’s Brian Ceballo, valiantly survived the first knockdown of his career to up his unbeaten record to 7-0, 3 KOs with a six-round unanimous decision victory over battle-tested veteran Randy Fuentes, (8-8-1, 2 KOs), of McAllen, TX. Scores were 58-55, 57-56 and 57-56. 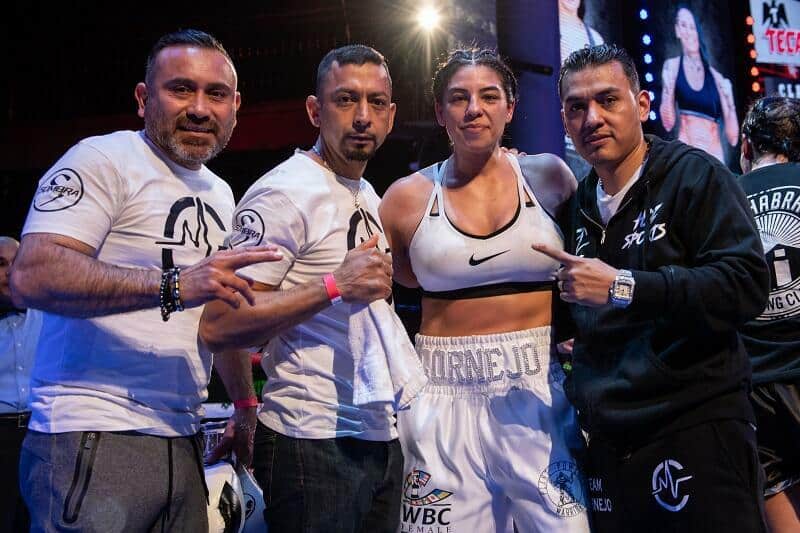 In the fifth round however, Ceballo would get dropped hard by a double left hook from Fuentes rising to his feet with a minute left in the stanza. Keeping Fuentes at bay, Ceballo would recover between rounds to hold his own in the final round.

Said a happy Ceballo after the fight, “This was the first time I’ve been down as a pro and it was definitely a learning experience. This was also the first time I’ve faced a southpaw and although I got knocked down it all happened to quickly that I just got back up and kept my head in the game. I’m happy for the opportunity. Randy came to fight, he’s fought a lot of top fighters and was here to win tonight. I’ll be back in the gym and ready to fight more tough opposition in the future.”

Said Tom Loeffler, “We knew this would be a great learning experience for Brian as Randy Fuentes just defeated a 17-1 opponent. He’s on the fast track with seven fights in less than a year and we look forward to announcing his next fight.”

In a scheduled four-round super flyweight bout, Christian Robles, (2-0, 1 KO), proved to be too much for Joel Bermudez, of Los Angeles, CA scoring a second-round knockout. After a fast paced, even first round that saw Robles surprisingly score a knockdown at the end of the stanza, the all-action Bellflower, CA native would finish the job at the :09 mark of the second.

Popular and undefeated bantamweight George Navarro, (4-0-1, 2 KOs), of Los Angeles, CA stopped the game Anthony Torres, of Visalia, CA at 2:34 of the second round in their scheduled four rounder.

Opening the evening in a four-round super bantamweight bout, Alberto Jr. Felix, (3-0, 2KOs), of Ontario, CA stopped Cody Sessions, of Riverside, CA. After an exciting and even first round, Felix would take the upper hand with a barrage of power shots calling a halt to the action at the 1:46 mark of the second round.

Details on the next edition of Hollywood Fight Nights will be announced shortly.