Eddie Hall is a shadow of his former self as the World’s Strongest Man continues his fitness mission.

Years of eating whatever he wanted are now behind Hall, who began at a starting weight of 375 pounds.

Hall is a trimmer 360 pounds after completely reshaping his body with the help of diet changes, swimming and boxing.

“I’ve dropped six kilograms of fat and actually put on a quarter kilo of muscle – all in 16 weeks,” explained Hall.

“This is (with) a realistic approach to dieting. I’ve pretty much eaten the same foods. I’ve just been swapping a few of those puddings for healthy yoghurts.

“It’s been tough as I’ve been travelling a lot and doing endless hours of work,  but I’ve tried my best and done everything I can to change my life for the better. 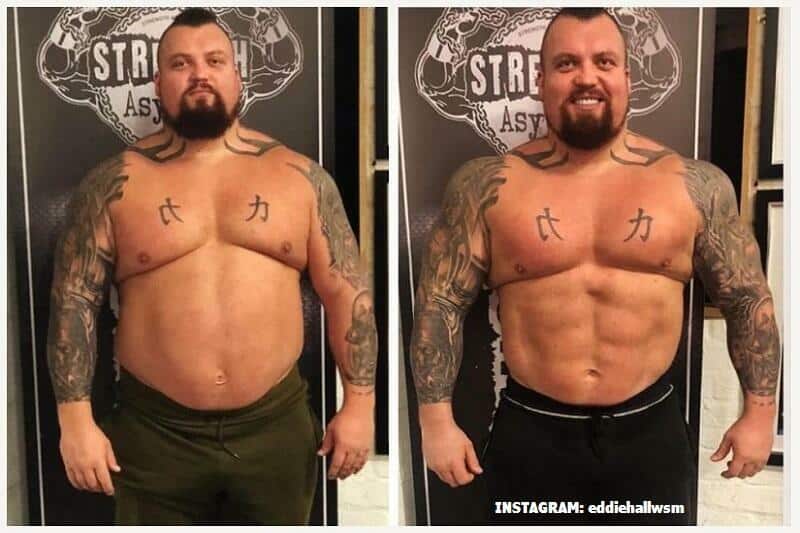 “I’m feeling great and intend on staying above 160kg and getting even leaner.

“I’m on an journey and I encourage you to join me,” he added.

Previously, Hall issued a challenge to former StrongMan opponent Robert Oberst. Hall offered the American a boxing match as both use the sport to keep fit.

“I think me and Robert Oberst should jump in a ring and raise some money for charity,” said Hall.

“Especially after seeing that pathetic excuse just put a boxing video up. (cringe)”

That video Hall speaks of has since been deleted by Oberst, who may not want any of the Briton after seeing his transformation.

It’s a far cry from the days when Hall sported one of the largest stomachs of all the StrongMan competitors.

Despite lugging around that huge amount of fat, Hall was still able to break the world record deadlift at 500kg.

The record still stands, although health caused problems for Hall that eventually led to his retirement from lifting such amounts.