Tensions between the pair have grown since Hearn stated a fight with Deontay Wilder won’t happen recently.

The Wilder is going ahead on December in Los Angeles, although Hearn had said it would never take place.

Hearn told Betting Pro: “No certainly not. I think he knows that and everyone in boxing knows that and unless he’s getting $20million for that fight.

“I don’t think he’ll take the fight against Wilder, to be honest with you. They’ve said it is happening but there’s no date or venue yet and I think Fury needs one more, he knows that.

“He’s done unbelievably to come back from where he was and he deserves a huge amount of credit but he looked very poor in his last fight, he got booed out of the ring, he’s not an entertaining fighter to watch.

“Tyson is awkward and tricky which is not great for people to watch but it’s effective as we saw against (Wladimir) Klitschko so I think if he can have a fight or two more, which was always his plan.

“He’s got a very good chance against the likes of Wilder and Joshua but right now, he stands no chance. ‘I think he might have something up his sleeve but I don’t see him getting in the ring this year with Wilder, for sure.”

Fury posted a ‘private and confidential’ three-fight deal from Hearn with a £3m guarantee for the first fight.

“Just something to shut a little t** of a boxing promoter up. Not a bad offer for the worse boxer out there! And there’s many more where that came from!

“So best of watching your mouth you t**,” said Fury in retort to Hearn labelling Fury ‘one of the most uninteresting boxers’ recently. 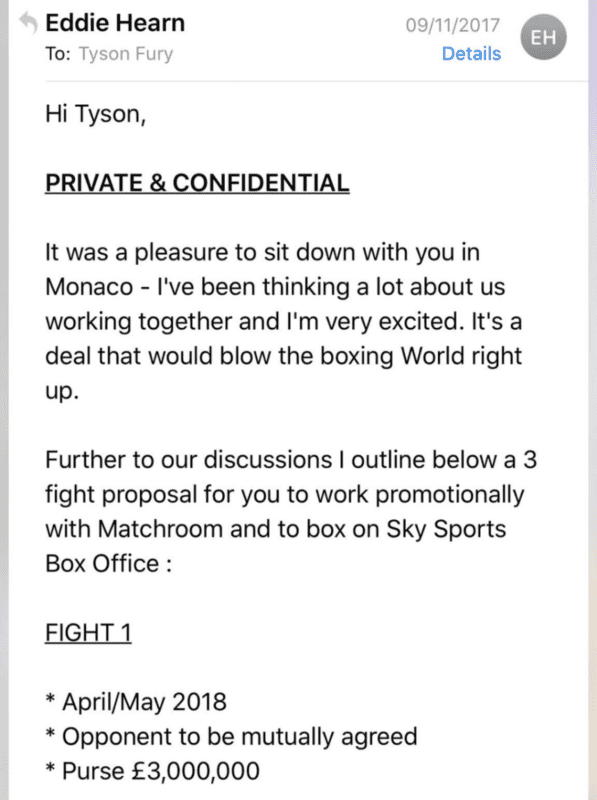 Earlier this year, Fury expressed his disappointment that Hearn ruled out a fight with Anthony Joshua in 2019.

“I have to say the saddest thing ever the British fight fans will never get to see Fury vs Joshua. That’s a crying shame!

“It’s the biggest British fight in the history of boxing in Britain but Sky and Matchroom have robbed the paying public again. Ask your self why don’t they want this?”

“Tonight is proof that I’m fighting the best heavyweight out there in Deontay Wilder. It’s clear that AJ will never fight me. I’ve never seen a bigger bum in my life,” he added.