Both participants weighed in on Thursday, Braekhus at 146.8 and Svensson at 144.6 for their scheduled 10-round bout. The bout was originally scheduled for January 28 but was pushed back four weeks due to a bout of the flu contracted by Braekhus. A sold-out crowd of over 10,000 is expected.

“There’s been some unnecessary and unexpected drama during this fight week,” said Braekhus, recognized universally as the #1 Women’s Pound-for-Pound Fighter in the World.

“All I want to do is fight but Svensson fights for my old promoter (Sauerland Promotions) and they’re not quite over that I left them to form my own company, First Lady Promotions and to work with K2 Promotions.” 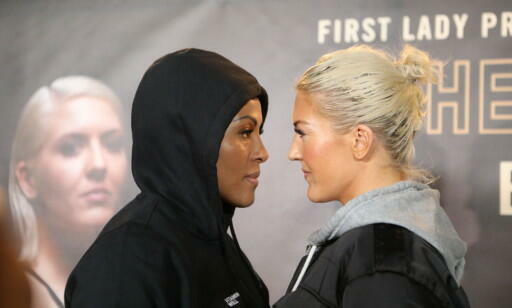 “But now we’re all weighed in and we have only the fight to look forward to. I’m just so thrilled to be fighting back home again in Oslo, back at the Spektrum, it’s such a great feeling, the entire country is behind me.”

“Camp has been terrific with Johnathon Banks, this is our third fight together but we’ve been working together for about two years. I feel much more aggressive, looking for those power punches and focusing on punishing my opponent. I’ve kept some of my European style but now I’m fighting more like an American fighter.”

“Maybe Johnathon is turning me into a Detroit fighter!”

Through Braekhus’ extensive lobbying work over the last several years, Norway lifted their 33-year ban on professional boxing in 2015. On October 1, 2016, Braekhus was finally able to fight in her home country, knocking out Anne Sophie Mathis in the second round, a national event that captivated the entire country.