Cruz’s best round came in the fifth as he turned up the action, giving Easter a pause more than once and pushed the champion toward the ropes. After that round, it was all Easter who threw flurries of punches, not always depending on his range, doing his best to pin Cruz back with powerful hooks and body shots. Easter wasn’t fazed by seeing the 10th round for the third time in his career as a big right hand sent Cruz to the canvas for the first knockdown of the fight. Cruz impressively rose to his feet, but Easter didn’t relent.

He continued his conquest and with 10 seconds to go in the 11th round, Cruz was saved by the bell after being knocked down again. Fighting to the finish, Easter gave the raucous crowd what they came for as he threw a big right hand that nearly ended the fight. Cruz did notably did not quit, but was no match for Easter as the judges scored the bout 119-106, 118-107, 117-108.

In the co-main event, three-time U.S. Olympian Rau’shee Warren (14-2, 4 KOs) came out strong from the opening bell as he utilized his hand speed and power by knocking Zhanat Zhakiyanov (27-1, 18 KOs) of Kazakhstan not once, but twice. Warren, who was defending his bantamweight title for the first time, could not finish the fight in the first round despite throwing a flurry of unanswered punches following the two knockdowns. The tables started to turn in favor of Zhakiyanov in the third round as he threw several consecutive uppercuts, pressuring Warren against the ropes. He threw two right hooks that knocked Warren to the canvas, but referee Gary Rosato ruled it a slip.

Trained and promoted by former unified world champion Ricky Hatton, Zhakiyanov applied pressure throughout the middle rounds, wearing Warren down. But the Cincinnati-native seemed to have gotten a second wind to kick-off the eighth round as he turned up the heat with one minute to go. Zhakiyanov continued to put pressure on Warren and use his strength. The fight was action packed from start to finish, but it was the Kazakh who earned the split decision victory with scores of 116-110, 115-111 for Zhakiyanov and 115-111 Warren. 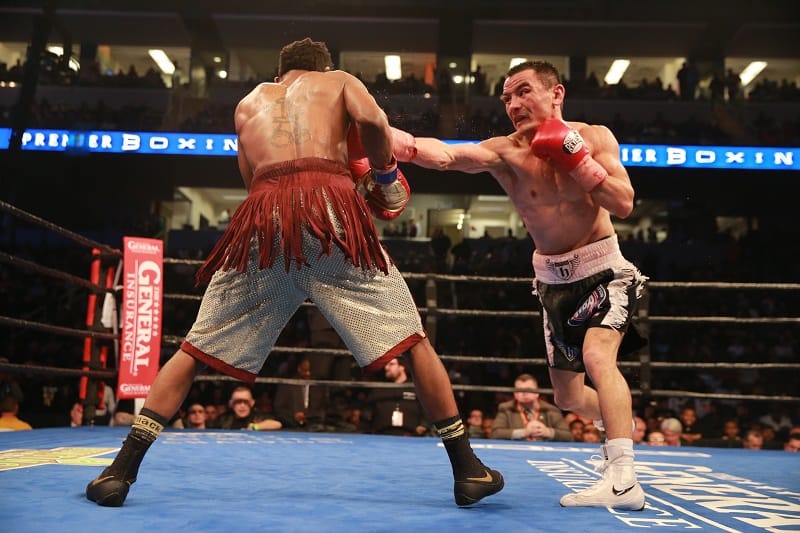 The telecast kicked off with a middleweight bout between Cleveland-native Terrell Gausha (20-0, 9 KOs) and Puerto Rico’s Luis Hernandez (15-4, 8 KOs). Gausha established his jab midway through the first round with three straight right hands to the face of Hernandez. However, it was Hernandez who surprised Gausha with a huge overhand right that floored the 2012 Olympian. Gausha easily bounced back from the knock down and was able to get himself out of trouble and continued to show his power throughout.

Referee Jim Howe deducted a point from Hernandez after two low blows in the seventh round. Hernandez remained determined despite taking a lot of big shots, especially in the ninth round when Gausha was a few shots away from ending the fight. In the end, Gausha earned a unanimous decision with scores of 98-90 twice and 97-91.

Robert Easter Jr:
“It was very important for me to remain focused tonight but also have fun. My people came out in full force so I wanted to give them a show, a night to remember. I feel like I did that, even though I wish I could’ve given them the knockout.

“I admit, I was very surprised that Luis Cruz could take my punches like that and finish the fight. When I had him down and hurt (in round 10), I thought he was done. I give him credit. He came a long way and showed a lot of heart.

“I said before the fight and I’m going to keep saying it – I’m here to collect all them belts. I’m not gonna pretend to be that guy who doesn’t call out other fights. I’m calling out Mikey Garcia, Jorge Linares and Terry Flanagan. I want them to see what we were able to do here tonight, the crowd I pulled in. I’m a superstar on the rise and now it’s time for me to collect my prizes and bring these fights and all of the belts home to Toledo.

“Even in seeing my brother (Rau’Shee Warren) lose a fight we all thought he won, I couldn’t let that distract what I had to do in the ring. I hated that Rau’Shee had to go through that again – losing in the Olympics three times, not getting his win in the first fight with Juan Carlos Payano, then not getting his belt for months after winning it, and now losing it like that. He’s had it rough, but we’re a team and we have to pick each other up. That became my mission to rise for the sake of the team.

“Realistically I’d like to come back maybe May or June. It’s always hard work but I’m not cut or marked up. I want to stay active and get all the champions and best challengers out there. TBT – The Bunny Team is getting ready to take over.”

Luis Cruz:
“He’s a very strong fighter. I wanted to do more but he took away my energy late in the fight. The first knockdown took a lot of out me. I felt dizzy but it was important for me to finish the fight on my feet. I never stopped trying to win, but he a great champion and the best I’ve ever faced.

“I’m going to return home (in Puerto Rico) and enjoy time with my family. I need to rest and relax. After that, I’ll think about what’s next for my career.”

Zhanat Zhakiyanov:
“I knew at the end of the fight that I deserved to win, but because of where we were, we weren’t sure if the judges would give it to us. So that surprised us, but not that I won the fight. I was hurt early, but I outworked him in almost every round after that and was the stronger fighter in the end.

“The knockdowns shocked me, but (trainer and promoter, former two-division world champion) Ricky Hatton kept me level-headed, telling me the adjustments I had to make. Once I was able to get inside and force the action, I saw (Warren’s) energy level drop.

“We are grateful that he gave us the opportunity to fight for the world title. It’s an amazing feeling to win that belt. He feels like he won the fight and wants the rematch. We can definitely talk about doing that. I’ve fought everywhere in the world and don’t back down from any challenge.”

Rau’Shee Warren:
“Man, I won that fight. I knocked him down, I was landing the cleaner punches and making him miss. What it is, the judges are favoring aggressive fighters, even when they ain’t even landing.

“I went through the same thing with (Juan Carlos) Payano, losing the first fight that I should’ve won and then getting the decision in the rematch. So now I have to prove to these judges the second time what I should’ve got tonight. Of course I want that rematch. I want it next, I want my world titles back.

“Obviously you can always do more. We’re gonna go back, look at what we could’ve done differently and make sure the judges don’t take it from me no more.”

Terrell Gausha:
“The knockdown was legitimate, but that was (Hernandez’) only good moment in the fight. He caught me clean, but it happened to me before (versus William Waters earlier in his career). Just like I did back then, I immediately adjusted and controlled the rest of the fight.

“It felt good to get so much from the fans in Toledo and all my fans that came from Cleveland (Gausha’s hometown). It was a great night out here and I’d love to do it again whenever they’re ready to bring us back here or even in my hometown.

“I’m ready to return whenever my team says the next opportunity is there for me. Hopefully it’s as soon as possible. This is going to be a big year for me.”

Luis Hernandez:
“I had him hurt but I didn’t finish him. I didn’t throw enough punches to slow him down after I knocked him down. He deserved to win; I could have done better and will do better in the future. I hope PBC brings me back soon as I want to show I belong with the best.”

Adrien Broner:
“It was a great turnout tonight. This was the first big promotion for About Billions; it definitely won’t be the last. We got my fight next week in Cincinnati and we gonna keep coming back strong.”

Ravone Littlejohn, CEO of billions Promotions About:
“It was a bittersweet night for us, with Robert Easter looking like a superstar but then with Rau’Shee Warren not getting the victory. We wanted the win in both fights for the fans, but the judges saw what they saw in Rau’Shee’s fight.

“The crowd exceeded our expectations. We knew it would be a big turnout but when they opened up the entire venue and we saw nearly all the seats filled, it was a special feeling. Now we get to roll this over to Adrien’s fight next week and look forward to keep bringing big events to Ohio.”