The British great, who is now overseeing Chris Jr’s prominent rise up the super-middleweight rankings, gave a full and frank verdict on a Golovkin clash in a recent radio interview with talkSPORT.

Eubank said the following this week:

“The sense is that he wrecks Golovkin,” Eubank told Gary Brazil.

“He doesn’t have anything on Junior – nothing.

The outspoken former fighter was then greeted by a long list of responses on social media, hardly any of which were in a positive manner. 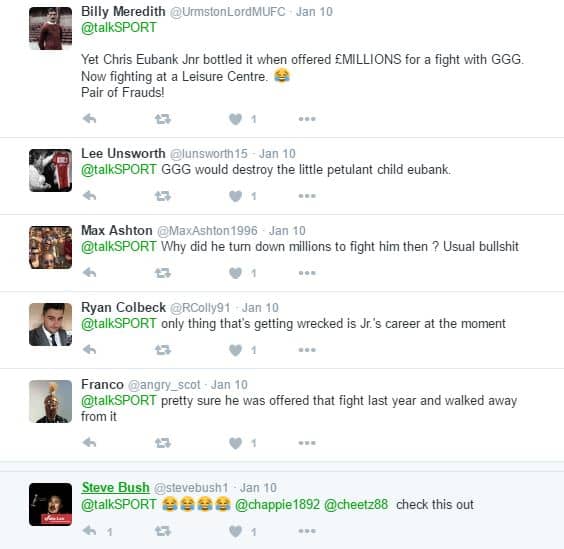 Junior is currently in training to challenge Renold Quinlan for the IBO title on February 4 in London after signing a deal with ITV to star on their first venture into Pay-Per-View.

The Golovkin fight could still be there for Eubank should he continue to rack up the victories as trainer Abel Sanchez exclusively informed WBN recently that ‘GGG’ will be moving up to 168 within the next 18 months.

Sanchez explained: “I can see him moving up for the right fight at 168 soon, but then moving back down to 160.

“I think then in about 18 months, Golovkin will be fighting and staying at 168. Maybe in 36 months, I can see him stopping and fluctuating between 168 and 175.

“The direction that Tom Loeffler and (managers) the Hermann Brothers take GGG’s career will be determined by what’s in the best interest of GGG and boxing. But it will depend on the possible big fights not just talking – but actually getting in the ring.”