In the co-feature, 2012 U.S. Olympian and undefeated heavyweight prospect Dominic “Trouble” Breazeale will enter the ring against the crafty “Big” Fred Kassi in a 10-round heavyweight showdown in the co-main event.

Below please find what the fighters had to say:

“I’m just ready to fight. Anybody can be knocked out. It just takes the right amount of time and patience. You have to set up for it. Some guys can take punches better than others, but I don’t think he’s faced any guy with the charisma that I bring to the ring.

“I don’t look at video or any of that stuff. I like to adjust when I get into the ring. It get’s me involved mentally and I can show off my IQ in the ring. I can’t wait for that bell to ring.

“When you talk about the heavyweight division, all of the guys and big and strong. You have to respect each fighter. At the end of the day, the records don’t matter. It’s about who’s the toughest, who’s the smartest and whose the most motivated in the ring. 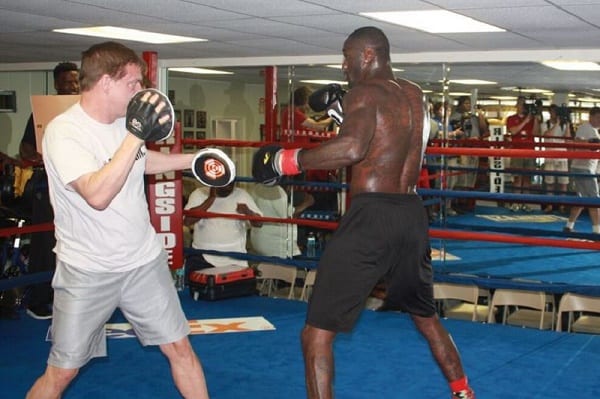 “For all of my fights I’ve been gaining more experience. I knew I could go rounds and take punches even though people didn’t think I could. With this fight, it’s a new style and a new opponent, so I might have to bring out something I haven’t had to in my career.

“Each and every time I fight it’s a learning experience. Inside the ring and outside. I’m a busy champion. I want to be the biggest name around. I’m the right man for the job.

“I love this sport. I’m married to this sport and I’m not going anywhere. My hand is stronger than it was before my last fight and I look forward to putting it to the test.”

“I’m very confident in myself and solid in my training. I have great confidence in all of the work that I have put in.

“Deontay’s a great fighter that hits very hard. I know that we’re in his neighborhood and that puts extra pressure on the fight. Either way, it’s a world title fight. Doesn’t make a difference if it’s in his backyard or mine.

“I’m not the first guy he asked to fight. Several refused before me but I’m the one who accepted the fight.

“We’ve got a great strategy in place. I have 15 years of experience. He’s a wonderful adversary, but like us all, he has weaknesses that I can expose.

“It’s been an honor to come to the United States. I feel like I’m in the movies that I used to watch as a child. I really appreciate this country.

“Height is always an issue when facing a taller guy, but it will be up to me to take care of that. I’ve fought several guys taller than me and I’ll be ready.

“This is a great experience for me. I’m trying to design my own road map to the world title. Deontay and I have taken different paths, but I know eventually we will be fighting for the same belt.

“PBC is doing some great things and it’s great to be back in this position. It’s phenomenal. These are the things you dream about when you’re a kid. I’m glad to be on this huge stage.

“I’m an aggressive, boxer-slugger type of fighter. I’m always looking for that big punch. When I land it, the lights go out.

“Last fight I got hit with some shots I shouldn’t have taken. This time I want to be more sound defensively. I’ve worked on my jab a lot and I want to establish that.

“Slugging is the only way I know how [to fight]. I never want to go the distance. Fans want to see someone get hurt. I’m in the best shape of my life.”

“I don’t know too much about Breazeale. After the fight, I can rank how good he is right now.

“I just have to be smart in there. I have to let him make a mistake and counter those mistakes.

“It’s going to be a great fight because I always come to fight. I’ve come up short a couple of times but I am coming here to win!”

“We’re going to keep doing what we’re doing. Deontay is fighting at a pace that has never been done before. No heavyweight champion has ever fought as frequently as Deontay Wilder is fighting. He’s fought three times in nine months.

“The possible fights with Klitschko, Tyson Fury and Alexander Povetkin take time to get done. While those are coming together, we’re fighting different guys. These guys here come to win. This guy can be an instant millionaire in one night.

“We work day in and day out. I’ve been there with Deontay since his first day in the gym in 2005. We had a plan, we stuck to the plan and it turned out to be the right plan.

“Deontay is the hardest worker in the game today. American has been wanting a heavyweight that is charismatic, energetic, wants to fight often, has a knockout punch, has the looks and everything that the heavyweight champ should have. He’s the man for the job.

“Deontay is never out of shape. We put a heart monitor on him and that thing does not lie. It will show you that Deontay is in shape and that’s why we are always ready to fight.

“Without Duhaupas there is no Klitschko, there is no Fury and there is no Povetkin, period. We’re gunning for the biggest opportunities possible but it starts on Saturday night.

“In the heavyweight division, anybody on the right night can be champion. That’s why it’s our job to make sure Deontay is ready mentally and physically. We know he’s ready.”

Tickets for the event, which is promoted by DiBella Entertainment in association with Bruno Event Team, start at only $25 and are on sale now. For Tickets please visit www.alabamatitlefight.com.