Headlines on Sunday morning once again proved that former heavyweight champion of the world, Lennox Lewis, gets overlooked in some sections of the press.

Stories on both sides of the Atlantic pinned Josh Taylor’s undisputed feat as the first of anyone from the British Isles. What gets seemingly forgotten is the fact that most saw Lewis as just that.

In 1999 against Evander Holyfield in their rematch, Lewis won the first fight but took a controversial draw. The pair fought for four versions of the heavyweight crown.

At the time, there was a debate over both the WBO and IBO titles. There’s an argument that plenty saw the IBO as more prestigious in the late 90s.

The next decade would see the belt held by numerous all-time greats, including Floyd Mayweather and Manny Pacquiao.

Therefore, Lewis holding the WBC, WBA, IBF, and IBO crowns after his decisive win over Holyfield was one hundred percent an undisputed triumph.

Even Mayweather has always stated that it only should take three belts to be lineal anyway. A sentiment echoed by WBN.

Two titles equal unified, meaning the next step should be undisputed. If a fighter today wins WBC, IBF, and WBO, that really should be enough due to the controversy surrounding the WBA.

During fight week, hearing some of the statements being bandied around, Lewis posted a quote from Albert Einstein. It certainly rings true.

“Information is not knowledge. The source of knowledge is experience. You need experience to gain wisdom,” it read. Some could use that in this instance. 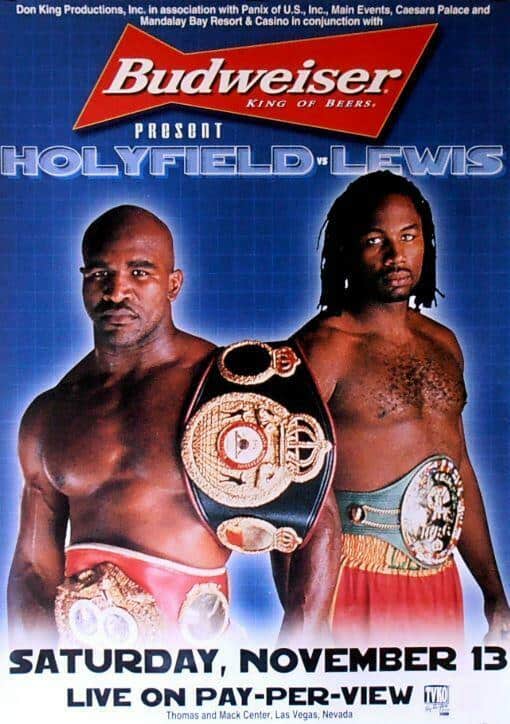 Taylor scored the best win of his career, and congratulations to him. The first Scottish fighter to achieve undisputed status. But Lewis was the last Briton to do it, and nobody should ever take that away from him.

On US TV in 2018, Lewis got overlooked again when Showtime labeled Mike Tyson as the last all-conquering top division ruler.

“So apparently Showtime thinks they can re-write history by writing champions like myself, Bowe, Douglas, and Holyfield out of it and by saying there hasn’t been an undisputed champion since Mike Tyson in 1999. I personally recall facing Holyfield for that honor TWICE,” said Lewis.

It’s another situation where alphabet titles muddy the waters of real champions and their achievements. It’s a good job. Lewis won’t let anybody forget that, either.