Two incompetent judges handed Adrien Broner a scored round over his opponent on Saturday without an actual punch landing in anger.

Broner is back. We know this, but how the former world champion returned to action is up for considerable debate.

Looking old and way beyond his 31 years, ‘The Problem’ took on undefeated Jovanie Santiago. For all intends and purposes, we knew Santiago was on-a-hiding to nothing.

Adrien Broner needed a win with multi-million dollar fights at stake, and he got it by any means necessary.

Tom Carusone and Peter Hary hang your heads in shame. You missed a punch landing from Broner, but you also missed Santiago scoring with three.

At best, the only argument you could come anywhere near would be to give a shared round, although that’s coming at a big push.

But you cannot justify Feldman giving Broner the third round when punches landed were 18-4 in favor of Santiago.

And all three gave the fifth to Broner despite Santiago landing more than twice as many punches.

In fact, in eleven of the twelve rounds, Santiago did more work and out-scored Broner in the punch department.

Quite astonishing that Santiago only took ten sessions on the tallies from 36 rounds with the officials.

None of the judges should get off scot-free. They should need to get hauled in for questioning on how they saw the fight for Broner.

CompuBox, in their summary, said: “Adrien Broner landed 35 of 138 punches over the first six rounds of the fight.

“Jovanie Santiago landed 93 of 305 punches over the same time frame.

“The ninth round was Broner’s most active, which saw him land 12 of 38 punches. Santiago landed 18 of 57 punches in that round.

The last line seems unjustified, given that CompuBox put the stats together.

“Though outworked over the entirety of the fight, Broner landed quality punches over the bout’s second half.

“This is why the judges awarded him a unanimous decision.” 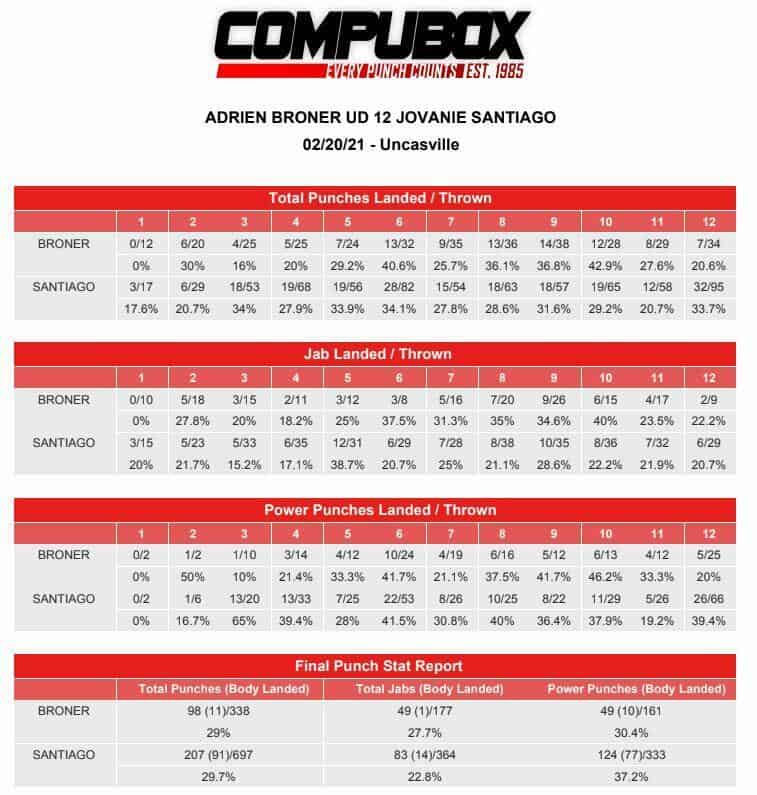 Is it worth a boxer landing a scoring punch if that punch doesn’t get scored? – Is it quality or quantity or both?