Matchroom boss Eddie Hearn knows the precarious position the world is in with coronavirus means no boxing event, including Joshua vs Pulev, is safe in the longer term.

Despite having a full half-year calendar announced prior to COVID-19 ending human interaction outside our homes, every promoter, including Hearn, has faced a reshuffle.

All March and April shows have been canceled or moved. May and June’s months are also looking likely to be under threat.

Dillian Whyte’s clash against Alexander Povetkin is due to be first up on May 2nd. This is almost certainly not going to happen in the current climate.

The UK Government has asked many people to self-isolate for up to twelve weeks. This leaves dates in May and early June seemingly off the table.

Therefore, if Whyte vs Povetkin has to be shifted, this has a knock-on effect on each and every event under Hearn’s banner.

It means Derek Chisora vs Oleksandr Usyk has to be pushed back. Even Anthony Joshua vs Kubrat Pulev.

“May is going ahead (as things officially stand), but we also understand that we have contingencies in place to move Dillian Whyte to the middle of June. (Also) to move Derek Chisora-Usyk back into the end of June, early July. And of course Anthony Joshua, who was due to go June 20, at Tottenham Hotspur football club,” Hearn told Sky Sports. 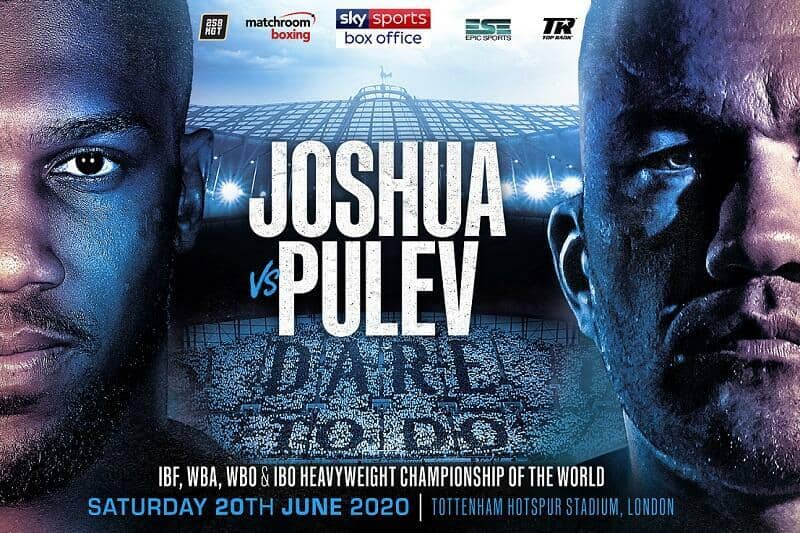 On why this is the case, Hearn explained the suspension of football has to take precedence over the boxing events staged at stadiums.

“We already have a reserve date that we’re discussing with Spurs of July 25 for Anthony Joshua against Kubrat Pulev at Tottenham Hotspur Stadium.”

Pulev, on the other hand, recently posted that he believes the fight will be off for months. A view some agree with.

The UK coming out of this coronavirus blockade any earlier than the later summer is looking increasingly unlikely at the moment.

Euro 2020 has already been moved to 2021, whilst the International Olympic Committee is considering delaying the Tokyo 2020 games.

It all leaves boxing fans not knowing when previously scheduled fight shows will recommence and everyone involved in limbo.