Delfine Persoon is set to make an official complaint following what was a controversial defeat to Katie Taylor.

The Belgian lost her WBC lightweight strap when seemingly doing enough as the aggressor against Taylor in New York.

With the victory, Ireland’s Taylor claimed the undisputed crown and left Persoon wondering what she must do to gain a win away from home.

Persoon is now planning to dispute the majority decision awarded to Taylor at Madison Square Garden.

“We were prevented from writing a beautiful page in the history of boxing,” Persoon told native news source Sudpresse at sudinfo.be. “Today everyone has seen and everyone knows that is a shame.

“In my eyes it’s not a defeat. What we will do now is of course make a complaint. But without much hope because Belgian boxing does not weigh heavy in the instances.

“But with my coach, we will quietly analyse this fight sequence by sequence, to have all the arguments to present an unassailable file.” 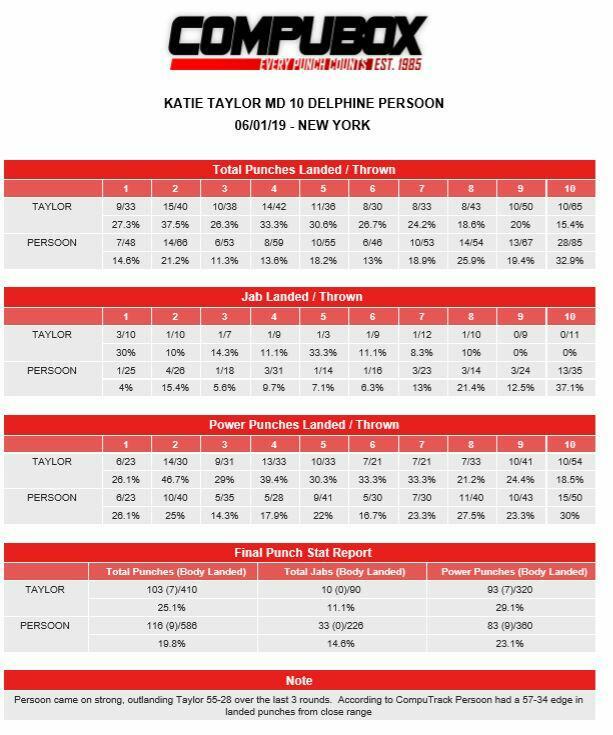 CompuBox stats uncovered a far closer fight than expected, although Taylor threw only ten jabs the whole fight and landed none.

Taylor’s key to triumph was accuracy, and on that basis, it’s highly unlikely Persoon’s claim would be addressed by the organizations.

A rematch would potentially be the order of the day, although the fight was incredibly tough for both competitors.

Consistent head clashes left the pair battered and bruised. It may be some time before either would want to repeat those ten rounds.

For now, Taylor has fully cleared out the division and may look to move up in weight. That could leave Persoon free to compete for her old WBC strap or any of the other three on offer last Saturday night.

A run at super-lightweight and a two-weight title win could then lead Taylor to a massive clash with pound for pound number one Cecilia Braehkus in 2020.