On Friday, February 22nd, Italian born SIMONE “TYSON” FEDERICI will be making his American debut at The Paramount in the main event of the critically acclaimed STAR BOXING series, “Rockin’ Fights”. Federici will be taking on Belgium native, JOEL “BIG JOE” DJEKO in what is set to be an all-world cruiserweight showdown between two fighters, looking to lay roots in the United States.

Star Boxing spoke with Federici ahead of his big fight, to learn more about his life, inspirations, and career goals:

Q: What was life like where you grew up?
FEDERICI: My neighborhood is the neighborhood where I live now. It is a suburb, not very big. Working a few steps from home, in the family bar, I am quite well known.

Q: How did you begin boxing?
FEDERICI: I started thanks to my uncle, an established boxer. Together with my cousin, we expressed a desire to learn to take the first steps. We started, and my uncle is still my coach, I have great respect for him. And it is thanks to him that I am now a step away from my debut in the United States, a new and very important experience for me.

Q:Who is your favorite fighter(s)? Is there any fighter you try and emulate in the ring?
FEDERICI: My favorite boxer is definitely Mike Tyson, from whom I took my fighter nickname.

Q: Do you have a family?
FEDERICI: Ihave a 28-year-old sister named Cristina, and my fiancée is named Ilaria, she is my age.

Q: What is your life like now?
FEDERICI: I am a bartender, but I want to realize my full potential in this sport and have a family. 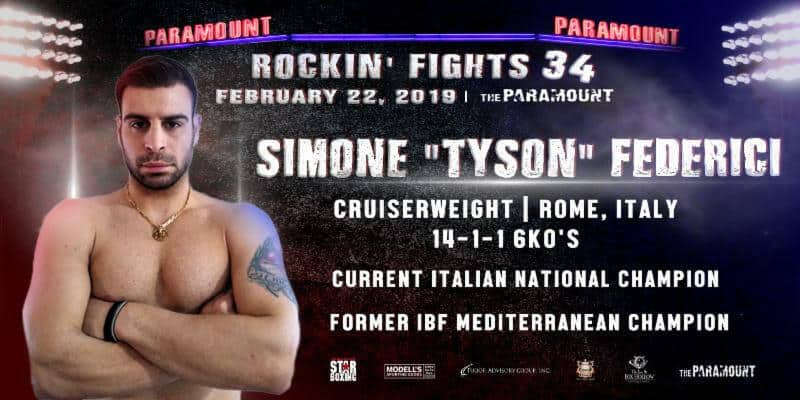 Q: How do you feel about this fight?
FEDERICI: Djeko is a good boxer who is taller than me, but I cannot miss this opportunity. For us Italians this chance does not pass so often … we will win!

Q: What are your career goals?
FEDERICI: I want to become a world champion.

Q: Do you have any other comments?
FEDERICI: I thank my trainer Franco Federici, Joe DeGuardia, Luigi Camputaro The Americans, as well as America and New York for this great opportunity. Also, Armando Bellotti, who was the real director.