Home » Chris Algieri return on verge of selling out

Chris Algieri return on verge of selling out

There has been an overwhelming response to the return of boxing sensation and former WBO Junior Lightweight World Champion, CHRIS ALGIERI to the Paramount on NOVEMBER 30TH as he headlines “Rockin’ Fights” 33.

Ticket demand to see the Huntington native has been tremendous. All of the top-priced tickets and all of the Sky Bar seats have already been sold out.

Only limited tickets remain. We are contacting you, because you are one of Star Boxing’s most loyal fans and ardent supporters and we greatly appreciate your patronage. We do not want you to be shut out from this top-tier event.

If you want the opportunity to see this stellar night of boxing action please be sure to purchase your tickets today as there are only a handful of seats left.

Chris Algieri returns to The Paramount for the first time since 2014, when he defeated highly touted prospect Emmanuel Taylor by a unanimous decision.

Algieri has dominated at his home venue, having fought eight times at The Paramount and having defeated the likes of world title challenger, Mike Arnaoutis, and then, highly regarded prospect, Jose Peralta. 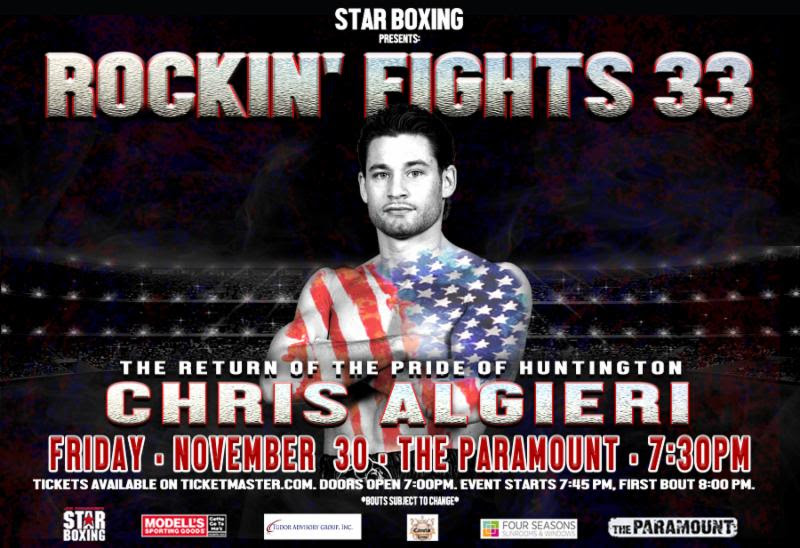 On November 30th, Algieri intends to pay homage to his strong hometown fanbase, earn his ninth consecutive victory at The Paramount, and make it a memorable homecoming. Be there to see the return of Chris Algieri, by purchasing your tickets HERE.