Saunders voluntarily gave up his WBO middleweight strap after Massachusetts authorities refused to license him for a mandatory defense.

The ruling came after Saunders tested positive for a banned substance with the Voluntary Anti-Doping Agency.

Promoter Frank Warren has vowed to launch legal action over what has been stated to have been the use of a nasal spray, although Eubank Jr. has moved to brand Saunders a drugs cheat.

“So, Billy Joe Saunders, how long you been taking illegal substances for, son?

“It’s funny how you were giving it to Canelo while you were cheating with drugs yourself.

“Enjoy your time out and don’t worry, the belt you’ve been stripped of will be in more deserving hands soon enough #Justice,” said the former IBO super-middleweight champion.

Eubank recently lost for the second time in his career to George Groves. Although Saunders was responsible for his maiden reverse.

Since then, animosity has been rife between the pair amidst constant rumors of a rematch. 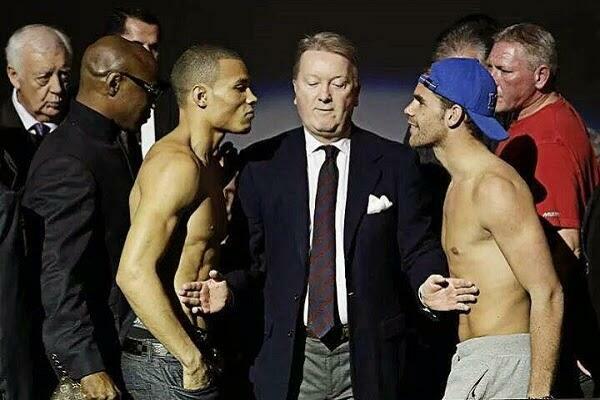 The son of British great Chris Sr. was linked to a December clash with James DeGale earlier this month.

With Saunders set for a six-month suspension, a further delay awaits those hopeful on a second encounter.

Scheduled opponent Demetrius Andrade was originally due to battle Saunders in Boston. The American will now fight Walter Kautondokwa for the vacant title on October 20.

With no fights at all in 2018 and just two since late 2016, Saunders is struggling to fulfill his potential in what are supposed to be his prime years.

Two fights with Martin Murray fell apart due to injury, whilst potential bouts with Canelo Alvarez or Gennady Golovkin are looking increasingly unlikely to happen.

More will be revealed during the planned appeal in the coming weeks.