Bruno, 56, was the subject of a scandal which rocked Great Britain and has received compensation and an apology.

As the news filtered through on Thursday, Bruno opened up on the ordeal.

I was forced to take on News Group Newspapers in High Court litigation.

Today, the High Court heard News Group Newspapers apologise to me as part of the settlement of his claim for misuse of private information and breach of confidence arising from phone-hacking.

My legal team, read out a statement in court confirming that the case had settled with me receiving damages. 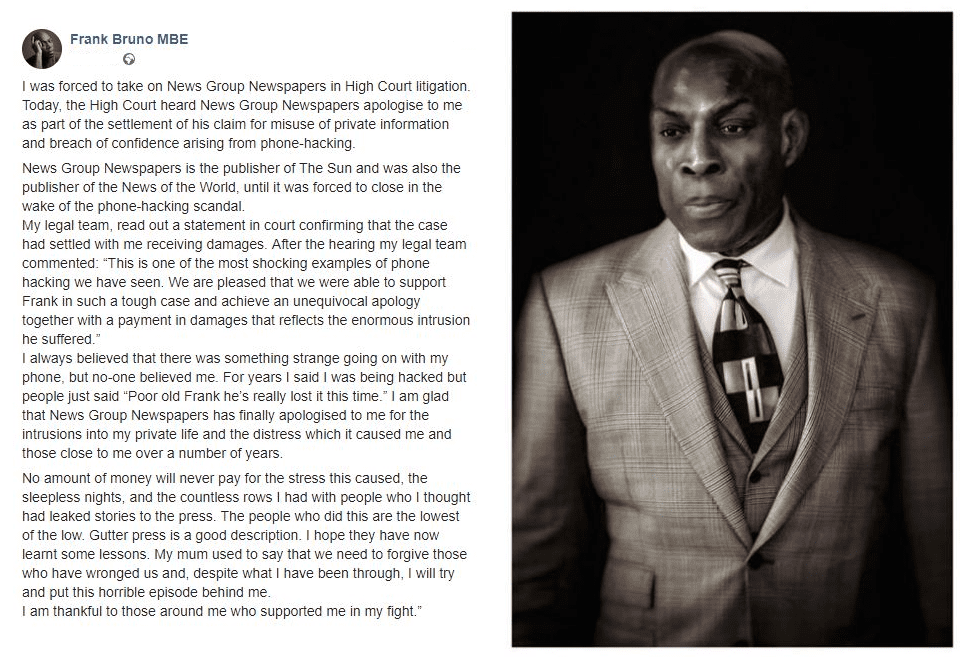 After the hearing, my legal team commented: “This is one of the most shocking examples of phone hacking we have seen. We are pleased that we were able to support Frank in such a tough case. We achieved an unequivocal apology together with a payment in damages that reflects the enormous intrusion he suffered.”

I always believed that there was something strange going on with my phone, but no-one believed me.

For years I said I was being hacked but people just said, “Poor old Frank he’s really lost it this time.”

I am glad that News Group Newspapers has finally apologised to me for the intrusions into my private life and the distress which it caused me and those close to me over a number of years.


No amount of money will never pay for the stress this caused. The sleepless nights and the countless rows I had with people who I thought had leaked stories to the press.

The people who did this are the lowest of the low. Gutter Press is a good description. I hope they have now learned some lessons.

My mum used to say that we need to forgive those who have wronged. Despite what I have been through, I will try and put this horrible episode behind me.

I am thankful to those around me who supported me in my fight. – Frank Bruno MBE

Claiming the world title at the fourth attempt against Oliver McCall back in 1995, Bruno retired from the sport a year later.