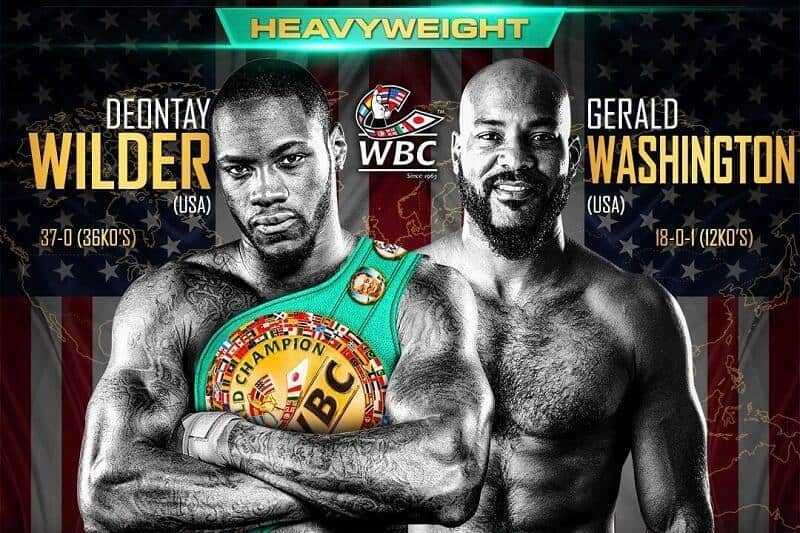 Deontay Wilder managed to sleep for a full four rounds before springing to life to halt Gerald Washington at the Legacy Arena.

The  31 year-old hardly threw a power shot in the first third of the contest before unleashing the big guns in the fifth round to take out the challenger.

Maybe luring Washington into a false sense of security, Wilder’s bombs had an instant impact with almost the first right hand that landed flush.

Wilder jumped on Washington after the official allowed the contest to continue, although ‘El Gallo Negro’ was out on his feet and was subsequently stopped.

‘The Bronze Bomber’ moves to 38-0 with the 37th early night of his career and onto a possible fight against the winner of Anthony Joshua v Wladimir Klitschko on April 29.

In the co-feature and in another exciting fight on Premier Boxing Champions, Jarrett Hurd picked up the vacant super-welterweight title.

Hurd defeated Tony Harrison after recovering from a slow start. ‘Swift’ gifted Harrison the first four rounds before springing into life in the fifth and gradually wearing his opponent down.

Harrison was out on his feet from the seventh round and it was just a matter of time before Hurd ended the contest with a pin-point right hand in the ninth.

In another barnstormer, Dominic Breazeale traded knockdowns with Izu Ugonoh in one of the best heavyweight battles of the year so far.

The pair felt each other out in the first two rounds until the contest exploded early in the third as Ugonoh hit the canvas. Breazeale looked on the verge of being put down himself but managed to catch Ugonoh coming in and drop him to the floor.

Ugonoh came back strong towards the end of the round by landing two solid rights before putting Breazeale down in the fourth as the tide turned in his favor.

Following a telling off from his corner, Breazeale came out fast in the fifth and managed to score another knockdown before finishing the fight by putting Ugonoh through the ropes after he got to his feet.

The win means Breazeale is back in the win column following his loss to Anthony Joshua in 2016, although on this evidence the American will need to work more on his defense.

Former 200 pound contender Iago Kiladze made a successful heavyweight debut by knocking out Byron Polley in the first round.